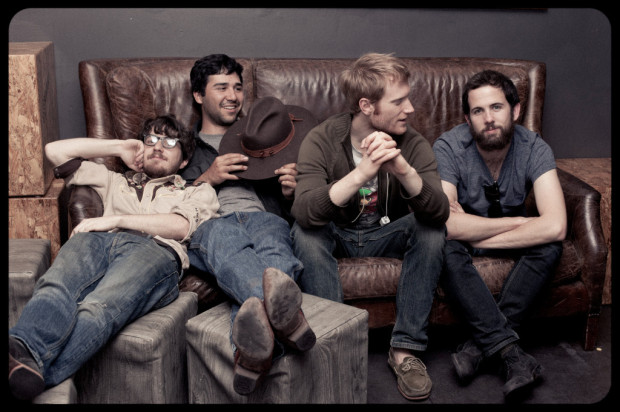 Nestled slightly in between New Mexico and Oklahoma in the panhandle of Texas sits the small, supposedly unincorporated town of Goodnight. Within its realms sits approximately 18 residents, as of the 2000 census, though the band that shares its moniker sees it as more of a 28-35 resident area.

Former Stone Foxes member Avi Vincour began his musical pursuits across the country from partner Patrick Wolf, a resident of North Carolina. The town they decided upon as their halfway point happened to be Goodnight, a volatile area in which major infrastructure flailed and ultimately sank at the expense of many modern factors.

“Charles Goodnight is really a Western, almost folkloric figure. He was a cattle herder and founded a university that’s since been shuttered,” Vincour tells the Appeal.

“It’s amazing how the town built up and collapsed. Charles Goodnight was really the founder of the Texas panhandle. I think the first football game in the Panhandle was actually played between Goodnight and another school. I think they lost, too.”

The hapless town saw victory in the band of the same name, as Vincour and Wolf continued to branch out musically, adding on touring and studio musicians that helped shape the brooding A Long Life of Living, the group’s debut album. Their critically acclaimed missive to the world dealt with themes of civil war-era towns, the small town lifestyle, and ultimately a state in which no particular area is your home.

“We’re sort of a nomadic band. We’re split of all over the place and Goodnight really is our center point. It just kind of sums up the band,” Vincour says. “I feel like we’re very focused on geography and small-town America, a lot of those Civil War places from the 19th century.”

Though Goodnight is one of the smallest towns to gain national recognition, Vincour and co. are forever indebted to the kindness of the area. A local resident, Mark Hansen, has let the band borrow his PA system for local Goodnight shows and the band is looking to collaborate Hansen on a later date.

So far Goodnight, Texas makes it an almost annual tradition to visit their namesake and offer up top-notch folk music. Unlike behemoth acts like Mumford & Sons or the Lumineers, Goodnight, Texas is a band focused on the inherent message of their songs rather than a commercial-friendly delivery.

The band, which claims SF as one of its supposed homelands, is set to play the city this Thursday at the Independent. Though A Long Life of Living is considered a relatively dour record, Goodnight, Texas is much more lively when it comes to their shows.

“It really does surprise people,” Vincour explains. “We’re energetic in our live shows and far more balanced than on record. I think the thing you can count on on our next album is more dance tracks, too.”