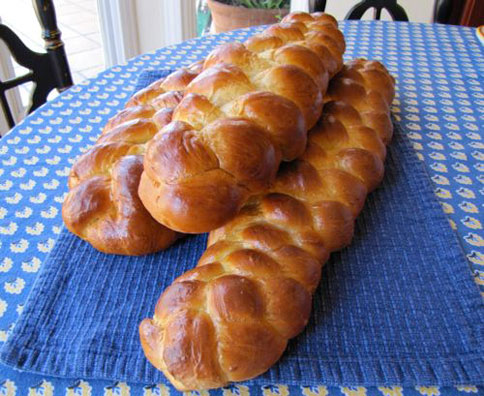 At sundown tonight the Jewish community in the Bay Area will celebrate the start of the New Year, or Rosh Hashana.

According to the Jewish lunar calendar the holiday is celebrating the beginning of the year 5774.

Following tradition, the holiday is filled with apples and honey to start off a sweet and healthy new year.
Other customs include eating a round challah, or a braided loaf of egg bread, and other sweet foods such as honey cake. Some observers include a fish head in the festivities.

These items and more represent new beginnings and cycles as well as prosperity and fertility, according to Jewish Community Center of San Francisco senior educator Rabbi Batshir Torchio.

The blowing of the shofar, or ram’s horn, also occurs during the holiday period.

Rosh Hashana marks the start of the High Holidays, which is followed by a 10-day period that concludes with Yom Kippur, or the Day of Atonement, when observant Jews fast for a day.

According to Rabbi Andrew Berlin with the Union for Reform Judaism western district, the high holidays are about introspection and reflection and plenty of soul searching.

“You want to rise to your highest self,” she said.

Torchio said this is the time of year for Jews to learn, engage and refocus.

“This holiday is about taking the opportunity for transformation,” she said.

At the end of new year services there is a chance for “cleansing and purity and being our better selves,” she said.

This year the High Holidays and other holidays fall earlier on the Gregorian calendar, something that will not occur again for many centuries.

“Judaism is so much about the marking of time and space,” Torchio said.

The first day of Channukah will coincide with Thanksgiving on Nov. 28 this year, when usually the eight-day festival of lights is associated with the Christmas holiday.

Although disconcerting that the Jewish holiday season is starting before summer ends, Torchio said it gives an opportunity to celebrate new beginnings before the rest of the American community does in January.

On Thursday, The Jewish Community Federation is hosting a “tashlich” service at Ocean Beach between Fulton Street and Lincoln Way.

The New Year ritual starting at 5 p.m. involves tossing bread into the ocean or a body of water to symbolically discard all sins from the past year.

This year’s event, dubbed “Tashlique,” aims to be a modern spin on the new year’s tradition with shofar blowing, bag pipers, and members of the SF Jazz Mafia and Ministers of Sound of the Saint John Will-I-Am Coltrane African Orthodox Church and jazz musician Ralph Carney performing.

San Francisco Mayor Ed Lee tweeted this afternoon about the start of the holidays.

“Warm wishes to Jewish families in SF & around the world celebrating Rosh Hashanah. I wish you a healthy and happy year. Shana Tova,” he said.

“Shana tova” is a common holiday greeting that means “good year” in Hebrew.

In the video, he said the New Year is the time to reflect on who we are and how we treat others.