Appealing TV: Witches, Wheelchairs, And We Are Men

Bar Rescue Beyond Scared Straight Brew Dogs Drop Dead Diva Hell on Wheels Ironside Knife Fight Sean Saves the World The Bridge The Millers The Neighbors The Originals The People's Couch The Vampire Diaries We Are Men Welcome to the Family Witches of East End by Paolo Sambrano | September 30, 2013 11:39 am | in Culture | 1 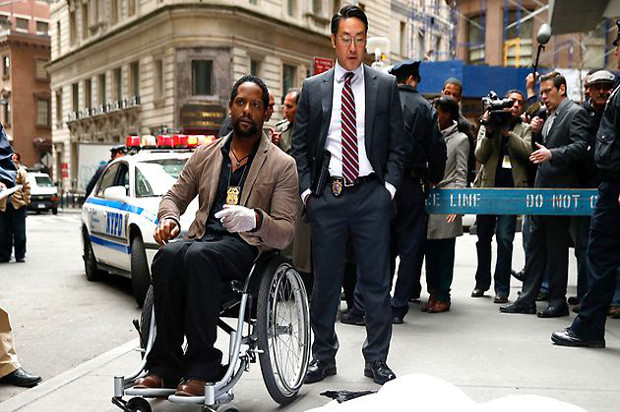 Goodbye, Talking Bad. Stay gold, never change, have a great summer. See you next year! After The Busiest Day in Television ™, what else is on?

Monday, September 30
We Are Men (8:30pm, CBS, series premiere)
I would have thought Tony Shalhoub, Jerry O’Connell and Kal Penn would have been more likely to end up in my XCOM squad than a sitcom on CBS. But here we are, with them playing single men in an apartment complex.

Tuesday, October 1
The Esquire Network, what was originally supposed to rise from the ashes of disbanded video game channel G4, instead took over the Style Network. Featuring programming that is focused on guys with money, here’s a couple of original programs to fill my Tuesday slot:
Knife Fight (9pm, Esquire)
Season two winner of Top Chef and notable bully of Marcel Vigneron, Ilan Hall, hosts a cooking competition in his restaurant, which is supposed to be like the cooler, broodier, edgier version of Chopped.

Wednesday, October 2
The Bridge (10pm, FX, season finale)
The Bridge introduced an intriguing cast of characters in an interesting setting, but only gave them room to play within a tepid procedural master-serial-killer arc for this season. Hopefully, with their second season pick-up, we will dig more into characters and stories of this world, instead of hunting for one single killer.

Thursday, October 3
The Millers (8:30pm, CBS, series premiere)
Greg Garcia (My Name is Earl, Raising Hope) created this multi-cam sitcom with Margo Martindale (well played, CBS), Will Arnett, Beau Bridges, and J.B. Smoove (I can only hope he will be getting into some ass, a la Curb). As much as I like the people working on this show, I have the urge to set everybody on this cast free, to other, greener pastures, like FX. Free Willy, but for TV shows. “You’re free! Be on a moody serialized and textured drama on cable!”

Welcome to the Family (8:30pm, NBC, series premiere)
After his mother said she didn’t like the content/language of his guest turn on Justified, Mike O’Malley said he wanted return to comedy. This is how he’s on Welcome to the Family. Which is a shame, because I liked him on Justified. Mike O’Malley or not, the groan inducing WTF ad campaign still would have rolled on.

The Originals (9pm, CW, series premiere)
Spinoff of The Vampire Diaries, only with even more witches and set in New Orleans. Is this what Treme was supposed to be about?

Sean Saves the World (9pm, NBC, series premiere)
Sean Hayes as a single dad trying to raise his daughter in a multi-cam sitcom world. Well hey, Thomas Lennon is in it, at least.

Beyond Scared Straight (10pm, A&E, season premiere)
If are you are still reeling from the end of Breaking Bad, and can’t get enough of the ABQ AND you invested the emotional points to get worked up about Justin Beiber walking Floyd Mayweather out during his fight against Canelo, boy do I have a season premiere of Beyond Scared Straight for you! Not only does this episode take place in the ABQ, but with a title like ‘Dance Bieber Dance’, you can only imagine that the inmates forced the teenage delinquents to pose in front of a Batman versus Superman script, and say that they were going to be Robin.

Friday, October 4
The Neighbors (8:30pm, ABC)
One of the worst shows of last year makes it to a second season but is placed in the Friday Night Death Slot.

Saturday, October 5
Hell on Wheels (9pm, AMC, season finale)
The season finale of the Western gunslinger drama featuring Common ends, and I’m not sure if it’s coming back. There are only so many spin-offs and final season split offs AMC can have before they run out of content gas.

Sunday, October 6
Drop Dead Diva (9pm, Lifetime, season premiere)
I remember when Lifetime was just a haven for episodes of Supermarket Sweep. Which I would have loved to be on as a kid, if I didn’t have to wear those stupid sweatshirts. Also, the game wasn’t well designed, there was no reason for anyone not to just pull turkeys and diapers – maybe get the pound of candy for the bonus cash.

Witches of of East End(10pm, Lifetime, series premiere)
Lifetime trying to preempt American Horror Story: Coven? Play Hydrox to Ryan Murphy’s Oreo? Or are producer types attempting to artificially create a new witch zeitgeist, akin to what the Large Hadron Collider is trying to do, only with black holes? Channing Tatum’s wife, Jenna, stars in this, at least.

Bar Rescue (10pm, Spike, season premiere)
I’m not sure what makes up a season, anymore. I could have sworn the season finale of Bar Rescue was a couple of weeks ago. Regardless, let me use this opportunity to tell you about the pilot my friend and I are developing about Bar Rescue. It’s a prequel to Bar Rescue, featuring Jon Taffer before he became the world’s premiere nightlife consultant. Look for ‘Rescue Me’ in 2015, and we think Fred Savage would be a perfect young Jon Taffer.

The People’s Couch (11:30pm, Bravo, series premiere)
The limited run series from Bravo, which was an adaptation of the British series Gigglebox, watches Americans watching television.