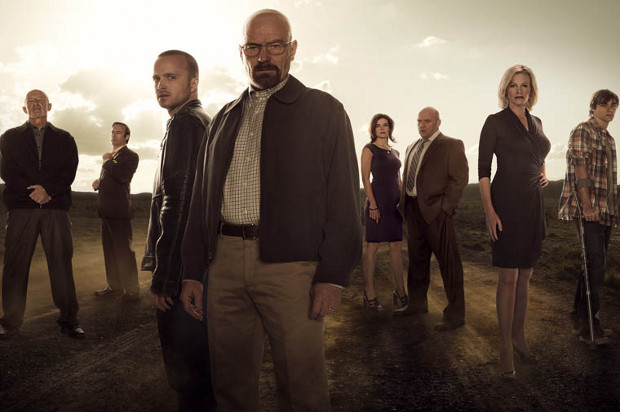 I hope your DVRs are ready, and your loins are prepared for Sunday September 29, which is probably the most important night in television history (c u Breaking Bad).

In this extra stuffed edition of Appealing TV, I dare you to try and read the entire entry in one breath (note: don’t do that).

Monday, September 23
8pm
How I Met Your Mother (CBS, season premiere)
This is the show’s final season, and now the mother is finally revealed. How will Ted Mosby use the M60 and the ricin cigarette?

NCIS (CBS, season premiere)
Television for the 60+ set to fall asleep to.

The Voice (NBC, season premiere)
Guys, we made a mistake with Usher. Here, have the original judges back. Or maybe that was our plan all along? Sorry Usher, you were just a pawn in this.

9:30pm
Mom (CBS, series premiere)
Is Chuck Lorre in the sitcom business or the money business? Neither, he’s in the empire business. New sitcom from the Chuck Lorre sitcom machine, starring Anna Faris.

10pm
Castle (10pm, ABC, season premiere)
How many ‘hey guys, Nathan Fillion was in Firefly’ references can you fit into a single season of Castle?

Hostages (10pm, CBS, series premiere)
You mean I can get all the tension and intrigue of a show like Homeland on network television? Aw man, Dylan McDermott is in it? I knew there was a catch.

Tuesday, September 24
8pm
Marvel’s Agents of S.H.I.E.L.D. (ABC, series premiere)
Still haven’t gotten totally on the hype train, because I am afraid it will just be a Case of the Week slogfest that wants to be The Avengers on a network budget. In which case, just make Gotham Central a television show.

NCIS: Los Angeles (CBS, season premiere)
I knew someone who confused Parenthood (the movie) with LL Cool J’s In The House.

10pm
Lucky 7 (ABC, series premiere)
A group of gas station workers win the lottery, and we see how their lives change.

Person of Interest (CBS, season premiere)
Jesus Christ and Ben Linus are like Ivory and Ivory, because they work well together. Wait, that’s not how it goes! Shit.

Chicago Fire (10pm, NBC, season premiere)
People who work in fire service sure have a lot of sex. Granted, I could say the same thing about people who work at Subway and pitch a show about it (sponsored by Quiznos).

Wednesday, September 25
8pm
The Middle (ABC, season premiere)
Sometimes you just need a good, solid sitcom. And The Middle is that.

Revolution (NBC, season premiere)
If the power did go out, shit would look like Mad Max, not a story of Thanksgiving pageant.

8:30pm
Back in the Game (8:30pm, ABC, series premiere)
It’s Bad News Bears the series. The cleaned up network TV of Bad News Bears with Maggie Lawson and James Caan.

9pm
Modern Family (ABC, season premiere)
The Yankees of sitcoms comes back for an hour-long premiere.

Criminal Minds (CBS, season premiere)
This show always seemed to be callous/salacious in its attitudes towards mental health issues to me.

10pm
Nashville (10pm, ABC, season premiere)
The one thing from last year’s freshman crop that charmed me, really glad this is coming back.

CSI: Crime Scene Investigation (10pm, CBS, season premiere)
Nitpicking, sure, but why does nobody on crime shows ever remark on the shocking amount of unusual murders that take place in the city/town the show is set in? You guys need some better social programs.

Thursday, September 26
8pm
Big Bang Theory (8pm, CBS, season premiere)
You can’t stop Big Bang Theory, you can only hope to complain to other people about how pandering it is.

Parenthood (NBC, season premiere)
It’s back for you to not watch, and for people to try and convince to you watch. You should watch it!

Friday, September 27
8pm
Undercover Boss (CBS, season premiere)
Aka “giving my employees only 39.5 hours so I don’t have to give them benefits seemed like a good idea at the time” the series.

Masterchef Junior Edition (FOX, season premiere)
I believe the children are our future of food media.

9pm
Hawaii Five-O (CBS, season premiere)
This show gives Scott Caan a paycheck, and that’s all I can ask for from a show nowadays.

Sunday, September 29
8pm
Once Upon a Time (ABC, season premiere)
I honestly still have no clue what this show is exactly about, and sometimes I confuse it with Grimm. But good on it for still being on the air.

The Amazing Race (CBS, season premiere)
Heading into its twenty-third season, how is this show still on the air? Not because like whatever, it’s stale, or whatever, but because much like cartography, most of the world has already been Amazingly Raced in, right?

The Simpsons (FOX, season premiere)
People still bitching about the quality of the Simpsons in this day and age are the type of people to remind you on Facebook that they’d rather be reading a book than watching sports on television because they’re better than you.

8:30pm
Bob’s Burgers (FOX, season premiere)
Tune in for the burgers, stay for the absurdness, tune in again for the sweet tunes.

The Good Wife (CBS, season premiere)
The Cod Liver Oil of television shows. I know it’s good for you, but bleeehhhhh.

Homeland (Showtime, season premiere)
After a misstep of a second season, will season three ditch the Brody/Carrie romance for more of the intrigue and emotional napalm of the first?

10pm
Betrayal (ABC, series premiere)
I don’t know about you, but I think somebody is gonna get betrayed.

The Mentalist (CBS, season premiere)
I thought The Mentalist lived only in syndication on TNT, much like the memories of those we loved and lost.

Eastbound and Down (HBO, season premiere)
I initially groaned at the announcement of a fourth season of the profane and pathos stuffed sitcom (thought positioning it as a trilogy was perfect), but am starting to come around.

Masters of Sex (Showtime, series premiere)
Martin Sheen and Lizzy Caplan as researchers pioneering advances in human sexuality in the fifties when everybody was a fuddy-duddy.