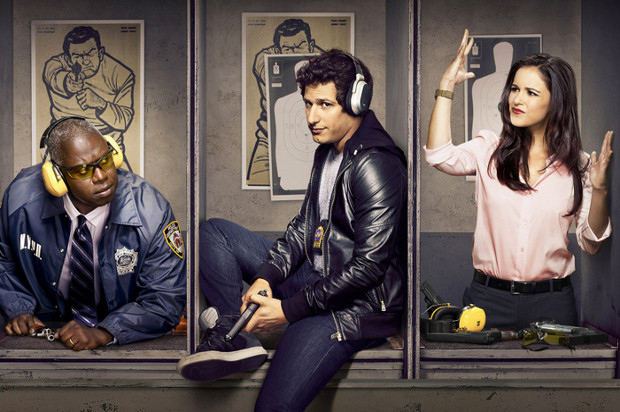 Between its Tuesday night comedy block, and its Monday night light drama fare, FOX is out of the gates this week in the 2013 – 2014 television season.

Monday, September 16
Bones (8pm, FOX, season premiere)
I’m not even trying to be facetious or snarky when I ask, ‘aye yo, Bones is still on the air tho?’ I could have sworn that the show ended a couple of years ago, along with House or something.

Sleepy Hollow (9pm, FOX, series premiere)
From the creators of Fringe comes a palette swap of JJ Abram’s failed 2012 midseason replacement, Alcatraz. Swap out San Francisco with Sleepy Hollow and time traveling inmates with Case of the Week friendly supernatural occurrences that can also lend themselves to light mythos.

Character actor Clancy Brown (Kelvin Innman from LOST, Zinn in Starship Troopers) is in the pilot, which almost guarantees that he will be killed during the first act of the pilot.

Tuesday, September 17
Dads (8pm, FOX, series premiere)
FOX has already punted Raising Hope to the Friday Night Death Slot to make room for this freshmen sitcom Executive Produced by Seth McFarlene and starring Seth Green. That’s already two strikes against it. Strike three comes by way of FOX declining to reshoot scenes that the Media Action Network for Asian Americans deemed as racist and sexist (sacist? rexist?) involving Brenda Song. With the justification of ‘hey, just keeping watching and see, it’s not racist after all, she’s actually a real person and not a Hello Kitty Oriental Bound Foot Schoolgirl Me So Horny cypher’. And now, FOX is attempting to reframe the marketing narrative by turning it into a critics vs. fans/snobs vs. slobs story.

And with that, blow it out your asshole.

Brooklyn Nine-Nine (8:30pm, FOX, series premiere)
I am really looking forward to this. From Mike Schur (The Office, Parks and Recreation) and Dan Goor (Parks and Recreation), this single camera sitcom is about a cop precinct in Brooklyn. Featuring Andy Samberg (Saturday Night Live, The Lonely Island), as a proficient but childish detective (described by Berkeley native Samberg as a “Comedy McNulty” [good po-lice]) butting heads against with the straight-laced and by-the-book new Captain Andre Braugher (the brilliant but canceled too soon Men of a Certain Age and ABC’s please-don’t-mention-that-godawful-Papa-Roach-song, Last Resort). It doesn’t look like it totally mines the mockumentary format used to great effect in The Office and Parks and Recreation, which is good! Rounding out the ensemble is TERRY CREWS (all caps justified), Jo Lo Trugilo, Chelsea Peretti, Melissa Fumero, and Stephanie Beatriz.

The Mindy Project (9:30pm, FOX, season premiere)
James Franco guest stars in the season two premiere of the Mindy Kaling created/helmed sitcom. Or that’s what the billboards tell me.

The Living Single-esqe opening sequence with a theme song evocative of fart sounds on a Casio keyboard in demo mode at the keyboard store at the mall only makes this show even more fun to watch.

Wednesday, September 18
Survivor: Blood and Water (8pm, CBS, season premiere)
I’m not sure when Survivor started using Spartacus-esqe melodramatic naming conventions, but keep doing it. The original awful people on island reality show looks to adapt Amazing Race-ian and All-Star/previous contestants meat grinder principles by both featuring past contestants and the people close to them.

Thursday, September 19
The Million Second Quiz (8pm, NBC, season finale)
Why, it feels like only last week I talked about the series premiere of the Ryan Seacrest hosted game show. That’s because it was. So I guess that’s how long a million second quiz is? I still don’t know, I’m still trying to figure out how the game works.

Friday, September 20
Last Man Standing (8pm, ABC, season premiere)
Can we all make a call to child protective services to get Kaitlyn Dever away from from this Tim Allen masculine panic sitcom and onto something else, anything else? It doesn’t even need to be a glorious return to Justified, although trust, I would not mind at all.