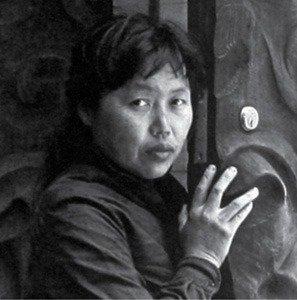 The Japanese-American artist had been a strong advocate of integrating art and education at San Francisco schools and started the School of the Arts. The high school at 555 Portola Drive was renamed for her in 2010.

At her memorial service attended by hundreds today at the bandshell in the park area in between the M.H. de Young Museum and the California Academy of Sciences, several family members reflected on the well-known artist, along with U.S. Rep. Nancy Pelosi, D-San Francisco.

Asawa’s grandson Xavier Lanier lauded his grandmother’s work to create the School of the Arts.

“My grandma created a place that talent like this did not go to waste,” he said.

He noted that her time spent in interment camps with her family along with more than 110,000 other Japanese-Americans during World War II influenced her art.

“She survived an incredible time,” he said.

Asawa was known for her wire sculptures and paintings, many of which are on display at the de Young Museum.

Many of her public commissions are on display in San Francisco and other parts of the Bay Area, including fountains at San Francisco’s Ghirardelli Square and outside the Grant Hyatt near Union Square.

Her Japanese American Internment Memorial Sculpture is on display at the Federal Building in downtown San Jose.
“She took a mess of metal and turned it into a masterpiece,” her grandson said.

Her youngest daughter Addie Lanier spoke about Asawa’s declining health in the last part of her life, and how in the last five years of her life she was bedridden and unable to use her hands.

“Her hands were so important,” Addie Lanier said. “She cooked, she sculpted, she drew.”

On the back of the program for today’s service was a recipe Asawa had concocted for ginger garlic salad dressing.

“She really cared about sharing with the next generation,” Addie Lanier said.

Pelosi spoke about Asawa as a friend and said she considered her an integral component of the San Francisco arts and education scene.

“Ruth Asawa loved San Francisco and the feeling was mutual,” Pelosi said. “This city adored her.”

Pelosi vowed to tell her colleagues in Congress about Asawa’s legacy and influence.

“It’s really important for Congress to know the breadth of her work and the depth of respect she commanded,” Pelosi said. “Ruth will be forever remembered.”

After the ceremony, art conservator Elisabeth Cornu recalled working with Asawa for a de Young exhibit in 2006.
“I was very impressed,” she said. “She was a force of nature.”

“She was very humble,” she said.

“She encouraged me to do my own art,” she said.

“She was very attentive, she was always useful. She always took care of everything,” she said.

Asawa lived with her husband, architect Albert Lanier, in San Francisco’s Noe Valley neighborhood for most of her adult life. She raised six children in the city.

The artist served as commissioner on the city’s Arts Commission in the 1960s and into the 1970s and was a trustee for the Fine Arts Museums of San Francisco.

High school students from the School of the Arts performed at the ceremony, including the choir, which sang Leonard Bernstein’s “Make Our Garden Grow.”

More about Asawa’s life and artwork is available at www.ruthasawa.com.

Donations to the Ruth Asawa Fund, a nonprofit that supports arts programming at San Francisco public schools, can also be made on the website.