Sparkly But Standard: Priscilla, Queen of the Desert: The Musical 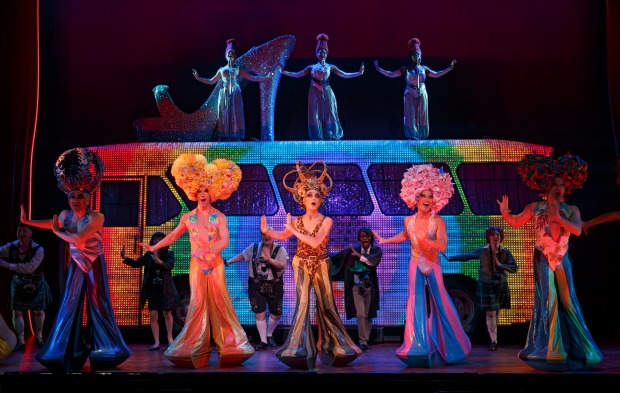 If you saw the 1994 movie The Adventures of Priscilla, Queen of the Desert, liked the costumes, but felt the actual drag performances were kind of stiff, well, you’re probably why this Broadway musical adaptation exists.

Priscilla, Queen of the Desert, which plays the Orpheum Theater through Sunday, is based on the movie, and follows the film’s basic plot. A drag performer named Mitzi Mitosis (Wade McCollum), recruits two fellow performers–the aging Bernadette (Scott Willis), and the young Felicia (Bryan West), to join him on a bus trip through the Australian outback. The final destination is Alice Springs, where they will be the entertainment in a local casino.

What Mitzi’s friends don’t know is Mitzi–aka “Tick”–has a wife and young son in Alice Springs, and seeing his son for the first time in years is the real impetus for the trip. (This differs from the film, as the existence of this son isn’t revealed until the end.) Along the way, they meet some friendly and not-so friendly, but always colorful, locals, finding opportunities to perform every chance they get.

Priscilla is a jukebox musical, meaning none of the musical numbers are original, and are instead pre-existing songs, most of them pretty standard drag show fare, like “It’s Raining Men,” “I Will Survive,” and numerous Madonna numbers. When the characters sing, it’s often because they are performing a show within the show, although occasionally there will be songs here and there just for the sake of it, like the elaborate number performed to “MacArthur Park,” sung merely because someone left a cake out (though not in the rain).

Most of the performers sing the songs themselves, so there’s not the usual lip-syncing found at most drag shows. And, in fact, there is comment made by the eldest performer, Bernadette, regarding the dying art of the drag show lip sync.

But all of the the singing is impressive, especially the vocals coming from the three women who hover, literally, above the stage, as a kind of Greek chorus. What’s slightly less impressive are the “Australian” accents, which go from passable (Mitzi), to cringe-worthy (his wife), to oh, let’s not even try (his son).

Also less than stellar is the drama placed on top of the fun. Whenever Mitzi’s son Benji is on stage, the show grinds to a halt. When they go for heart, it turns maudlin, and at times, just plain dumb.

But really, the main reason to see the show is the spectacle of it. Dancing cupcakes and paintbrushes. A dress made out of flip-flops. Cheerleader outfits with pompons that also serve as wigs. It’s all amazing to behold. The original movie won an Oscar for Best Costume Design, and the show has taken some of those original concepts, and multiplied them by 100. (It earned a Tony award for best costumes as well.)

Also impressive is Priscilla, the bus at the center of the action. It revolves around the stage, showing the interior from one angle, then spinning around to show its shiny chrome exterior, an exterior that also gets its fair share of drag adornments, glowing pink at times, and at other times providing a video backdrop to the dancing and singing taking place in front of it.

Basically, Priscilla, Queen of the Desert is the most elaborate, shiny, sparkly, and expensive drag show you’re likely to ever see.