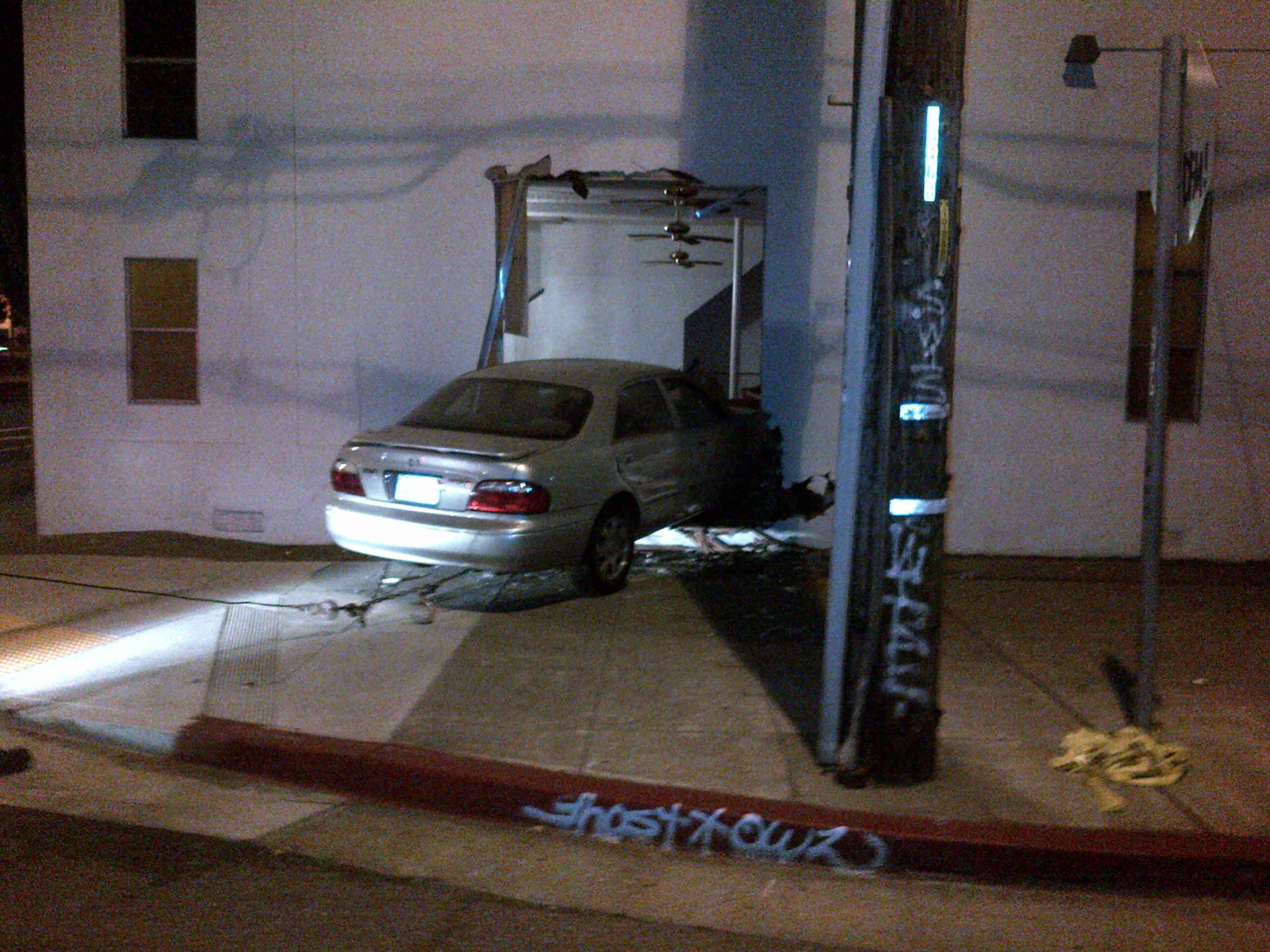 Police arrested four suspected gang members Sunday night after a shooting in San Francisco that led to a pursuit over the Bay Bridge and a crash into a church in Oakland, a police spokesman said today.

The shooting, which did not injure anyone, was reported at 8:27 p.m. Sunday near Leavenworth and McAllister streets.

A four-door silver sedan was seen leaving the area and was later spotted in the area of First and Mission streets as it headed toward the Bay Bridge, police said.

Officers tried to stop the vehicle while on the bridge but the driver refused to yield and a passenger threw a firearm out of the car, according to police.

The pursuit then continued onto city streets in Oakland, where officers finally stopped at West Grand Avenue and Market Street because the vehicle was going at a high rate of speed, police spokesman Sgt. Dennis Toomer said.

The suspect vehicle, a silver four-door Mercedes, continued but then crashed through the wall of Joshua Christian Church a short distance away at West Grand Avenue and West Street, Toomer said.

No one was injured in the crash, he said.

The crash, which ended with the car completely inside the church building, drew a small crowd Sunday night, including Joshua Christian Church Pastor Donald Scurry.

He joked that the driver must have really wanted to make it to the morning service on time.

Scurry said the damage to the church was extensive, and that the car took out a number of pews. He anticipates that the next service, which is scheduled for Tuesday, will be canceled or held upstairs if the building is deemed safe.

He pointed to skid marks on West Grand Avenue and said it appears the driver lost control while trying to turn right onto West Street while speeding.

Scurry noted that it was lucky no one was inside the church at the time of the crash, especially since there was a service there earlier in the night.

“We had a renewal of vows this evening,” he said.

Scurry said the church has been hit by cars several times in the past.

“One time a limousine went in there,” he said.

This crash caused the most damage, though, and Scurry said it would help to have metal bars on the sidewalk around the church to block it from traffic.

The San Francisco shooting was the second in the city’s Civic Center area on Sunday evening and the third in San Francisco that day.

Multiple gunshots were fired in the area of Larkin and Grove streets around 6:35 p.m., just minutes after the SF Pride celebration officially wrapped up.

Two men were shot in the leg and suffered injuries that were not life-threatening, Toomer said.

A suspect was seen running on Larkin Street after the shooting, but no arrest was made Sunday night. It was not clear if the victims were the intended targets of the shooting.

Earlier in the day, around 3 p.m., 30-year-old Otto Brown was shot and killed on the 700 block of Kirkwood Avenue in the Bayview District.

Anyone with information about this case is asked to call the Police Department’s anonymous tip line at (415) 575-4444 or to send a tip by text message to TIP411 with “SFPD” in the message.