George Shultz Supports Fracking, But Says “I drive on sunshine, and it’s free” 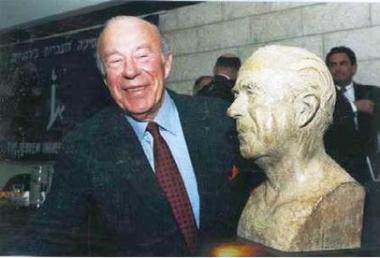 Former Secretary of State George Shultz told a San Francisco audience today that the world is “awash in change,” and said he has some ideas about how the United States should respond.

“My orientation is to the future,” the 92-year-old Shultz said a noontime talk at the Commonwealth Club.
Shultz served as secretary of state under President Ronald Reagan from 1982 to 1989.

He was also labor secretary, Office of Management and Budget director and treasury secretary under President Richard Nixon between 1969 and 1974, and has been an economics professor and president of Bechtel Group Inc.

Shultz is now a fellow of the Hoover Institution at Stanford University and recently published a book entitled “Issues on My Mind.”

He ranged over topics including climate change, energy, surveillance, human rights and nuclear arms control in his talk.

Climate change “is a very real problem and we have to do something about it. In the Arctic there’s a new ocean being created” because of ice melting, Shultz said.

Research and development of new energy technologies will be part of the solution, said Shultz, who said he supports drawing on energy sources ranging from fracking to solar power.

Fracking, or the hydraulic fracturing of underground rock to obtain oil and natural gas, is the cause of some environmental concerns.

“Are there problems with it?” Shultz asked. “Yes, but there are people who know how to do it right,” he said.

Shultz said he drives an electric car and has solar panels on his house.

Asked about National Security Agency surveillance of Americans’ communications, Shultz said, “I think these efforts are justified by the need to know about the terrorist things that might happen.

“You want to find out about the things that might happen and prevent them.”

Shultz said he believes that “what makes people nervous is not the proper uses” of communications records collection, “but the possibility it could be misused.”

The former secretary said he thinks it is important to keep human rights as well as arms control on the agenda in discussions with other countries such as Russia.

At the same time, he said, U.S. representatives should be “totally realistic” about the countries with which they are negotiating.

At the Hoover Institution, Shultz has been working on a project to advocate the reduction of nuclear arms, which he said is more important than ever now that North Korea appears to have nuclear bomb technology, Iran may be developing it and tensions between India and Pakistan are continuing.

Shultz said he began thinking about nuclear arms control when, as a Marine on a troop ship returning from the Pacific in World War II, he learned of the atomic bomb dropped on Hiroshima on Aug. 6, 1945.

That was the first time he had heard of an atomic bomb, he said.

Later, he saw pictures of the destruction caused.

“You say to yourself, what kind of a weapon is this? Should a human being be able to drop a weapon like this and create this kind of devastation?” Shultz asked.

On the topic of U.S. government administration, Shultz said he regrets the additional layers of management bureaucracy that have been installed in federal agencies since his years in government.

Shultz said he thinks the most efficient structure is to have only a few levels of management with the final responsibility left with the person at the top.

“You have a responsibility to manage,” the longtime executive said.