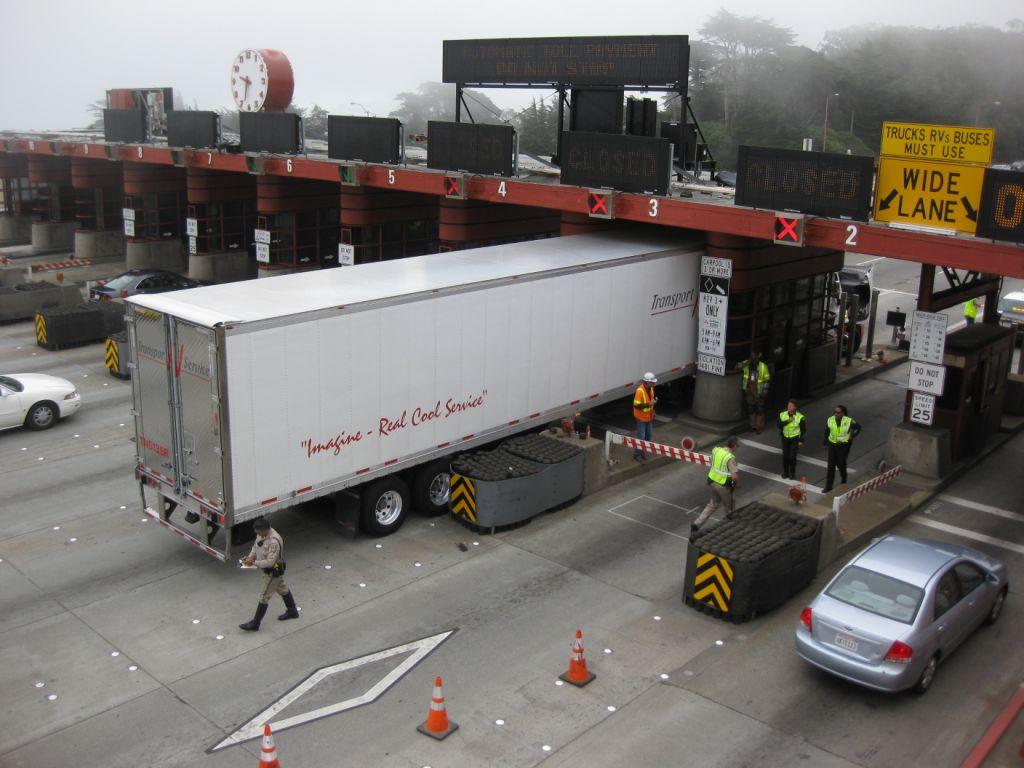 2:39 PM: The driver of a big-rig that became stuck in a narrow lane at the Golden Gate Bridge’s toll plaza this morning said traffic prevented him from getting to the wider lanes to his right, a California Highway Patrol officer said.

Dayler said that as he approached the toll plaza at the southern end of the bridge around 8:45 a.m., he tried to merge toward the two wide toll lanes to his right but was unable to because of traffic, Barclay said.

Instead, Dayler drove into a narrower lane and the truck hit a concrete curb and scraped against other parts of the toll plaza. The truck’s front axle broke, and big-rig became lodged in the plaza, Barclay said.

Barclay said the driver should have slowed down and stayed to the right as he approached the toll plaza.

“The driver failed to stay in the right-hand lane as is advised by multiple signs across the bridge as well as large yellow signs directly above the No. 1 and No. 2 toll lanes at the toll plaza,” Barclay said.

The No. 2, 3, and 4 toll lanes were closed after the accident to make way for the investigation and the removal of the big-rig.

A heavy-duty tow truck straightened the trailer portion of the rig so it would fit through the toll plaza, and lifted the front cab of the truck to disconnect the broken axle, Barclay said.

The tow truck then pulled the big-rig south through the toll plaza lane.

The CHP reopened traffic lanes at 11 a.m., but the Golden Gate Bridge District kept the No. 2 and No. 3 toll lanes closed to make repairs, Barclay said.

Bridge district spokeswoman Marry Currie said there was damage to some electronic toll equipment, but that the damage “is not a big deal.”

“It’s nothing that can’t be fixed,” Currie said.

10:09 AM: A big-rig crashed into the toll plaza at the Golden Gate Bridge this morning and remains stuck there, a California Highway Patrol officer said.

The crash was reported at 8:43 a.m. in the third southbound lane from the left at the toll plaza on the southern end of the bridge, CHP Officer Andrew Barclay said.

The toll plaza was damaged, and the front axle of the truck snapped in the accident, Barclay said. No injuries were reported.

Golden Gate Bridge spokeswoman Mary Currie said the big-rig driver had tried to use a lane that was too narrow for the truck.

She said tolling equipment was damaged but the damage is “not a big deal.”

The big-rig remained disabled as of about 9:40 a.m. and was blocking three southbound lanes at the toll plaza, Barclay said.

Although the crash initially caused a minor backup on the bridge, he said “traffic seems to be flowing smoothly right now.”

Barclay said a heavy-duty tow truck has arrived at the scene to remove the big-rig.

9:48 AM: A big-rig crashed into the toll plaza at the Golden Gate Bridge this morning, a California Highway Patrol officer said.

The crash was reported at 8:47 a.m. in the third southbound lane from the left at the toll plaza on the southern end of the bridge, CHP Officer Ron Simmons said.

The toll plaza was damaged and big-rig has damage to an axle, Simmons said. No injuries were reported.

The big-rig is disabled and blocking the lane, and a heavy-duty tow truck has been called in to remove it, Simmons said. He did not know how long that would take.

Currie said the lane the big-rig driver tried to use was too narrow for the truck.