Dentures, A Wedding Band And Earrings Found In Forgotten Graveyard 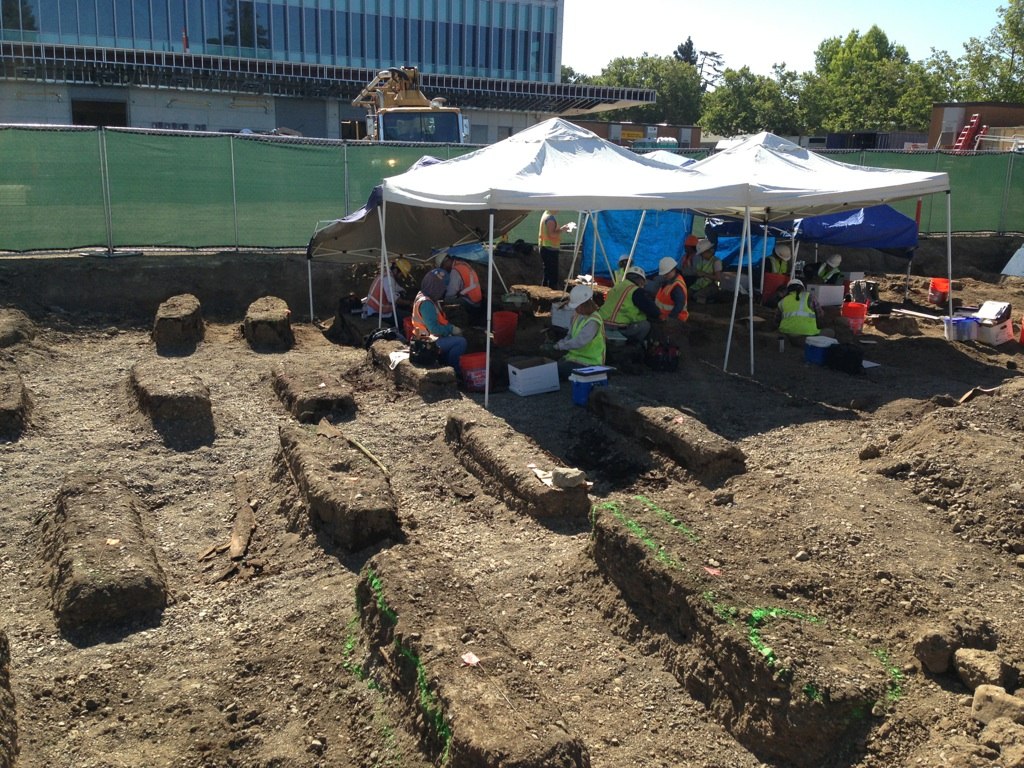 Dentures, a wedding band and earrings were among the artifacts found by experts in a forgotten graveyard containing the remains of at least 631 people behind the Santa Clara Valley Medical Center in San Jose, a spokeswoman said.

Archaeologists and bone specialists in hard hats who were excavating the site today used brushes to dust dirt off the skeletons of individuals who died at the county hospital sometime between 1875 and 1935, hospital spokeswoman Joy Alexiou said.

None of the people have been identified thus far and once examinations of the remains are completed, the bones will be turned over to the Santa Clara County medical examiner’s office, Alexiou said.

The medical examiner will then have the unidentified remains cremated in accordance with state law, Alexiou said.

The latest part of the excavation, unveiled by the county to reporters this morning, contained more than 50 unmarked graves with skeletons, many in redwood coffins that have since all but dissolved into the ground.

Examinations of their bones revealed many had limbs amputated, probably due to diabetes, and a number had died from syphilis, Alexiou said.

The persons buried in the cemetery probably succumbed at the county hospital, which opened in 1876, and were either indigent, unidentified or unclaimed by family members, she said.

“Every coffin you see out here had a family,” said Jim Zetterquist, 59, a lifelong San Jose resident, while gesturing to the rows of remains.

“Unfortunately, they were down on their luck when they passed away, but luckily they had a safety net that provided medical treatment for them and a coffin and a burial site,” Zetterquist said.

While artifacts are considered rare in a Potter’s Field for the poor, the county displayed some recovered there: pipes, buttons, marbles, cufflinks, a pocketknife, a scalpel, an 1882 Indian head penny and silver dimes dated 1902, 1903, 1904 and 1905.

Bones from the graves are being cataloged, removed and shipped for examination to the bio-anthropology lab at San Francisco State University, Alexiou said.

“Depending on the condition of the coffin, it typically takes one or two days per coffin, but it can take longer,” Alexiou said.

A few of the graves unearthed so far had more than one body, including a mother and an infant, who both may have died during childbirth, Alexiou said.

Each of the graves has been isolated onto separate mounds and has one archaeologist and one osteologist assigned to examine the contents, Alexiou said.

About 15 of the coffins were unearthed in February 2012 as the construction company URS began digging six feet down to build a loading dock for a medical supply building at the medical center, Alexiou said.

URS sent employees from its archaeological division to work the site and D&D Osteological Services of San Jose was hired to analyze the bones for age, sex, growth, disease and cause of death.

Most of the bodies, some in old-fashioned hexagonal-shaped coffins, were of men from 23 years old to over 60.
The complete skeletons are being stored temporarily at the state university’s lab, Alexiou said.

Another trove of unmarked graves, in addition to the 631 found so far, will be disinterred in the southern section of the half-acre graveyard by the end of the year, she said.

Still more bodies likely lie beneath the asphalt parking lot further south, but the county currently has no plans to dig in and explore there, Alexiou said.

The graveyard, without markers or signs, was basically overlooked since the 1930s and by the 1950s had dropped off local maps. In 1966, a parking lot was built over it and the graves remained unnoticed until last year, Alexiou said.

Meanwhile, construction on the medical center’s services building is continuing and has not been affected by the excavation, she said.

Zetterquist wondered if his great, great, great uncle, Secundino Robles, was buried in one of the unmarked graves.

Robles, born in 1811, was a once-wealthy California rancher in the Palo Alto area who died penniless in 1890 and according to a written record, was buried as a ward of the county, Zetterquist said.

“It leads me here in my search for Secundino,” said Zetterquist, who is writing a book about his relative. “There is no way right now to tell but there may be some way to find records.”