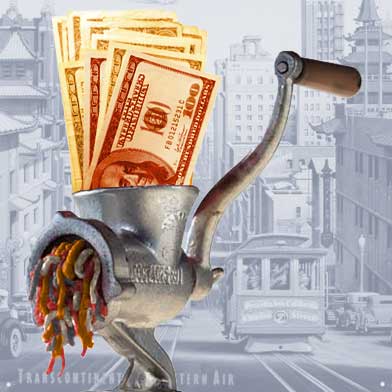 San Francisco Municipal Railway service disruptions cost commuters at least $50 million in economic production annually and the system remains far away from its on-time service goals, according to a report released today by city officials.

The quarterly report by San Francisco Municipal Transportation Agency officials and city economist Ted Egan was requested earlier this year by Supervisor Scott Wiener, who held a hearing of the Board of Supervisors’ land use and economic development committee to discuss the report’s findings.

The report, which Wiener said he believed was the first of its kind in the city, found that Muni breakdowns cost at least $4.2 million in lost productivity for commuters in April, or at least $50 million each year.

Wiener noted that those numbers were conservative since the report only looked at peak weekday hours and disruptions caused by maintenance-related issues, not the frequent bunching of vehicles that creates gaps and delays in service.

The report also found that still only 58.7 percent of Muni buses and light-rail vehicles are arriving on time, well below the 85 percent goal mandated by city voters, and that there were 216 delays of more than 10 minutes on Muni lines in April.

The report shows “the real-life consequences for our city,” Wiener said. “People are delayed and frustrated in getting where they’re going, leading to negative economic impacts and reduced quality of life.”

He said, “It’s important for the public to understand the scope of the problem and the data underlying it. Only with that information … can we work to move the system forward.”

SFMTA director of transportation Ed Reiskin said the system’s struggles are “based in part on the lack of investment over the years.”

Reiskin said the report could be helpful in pushing for more funding for Muni improvements since it shows they can have “economic benefits that exceed their cost.”

He said $50 million could be used to replace 10 light-rail vehicles or 64 buses per year and help reduce the lost economic production to the city.

Supervisor Jane Kim said the number of service disruptions were “frustrating,” especially in her district where several large projects are planned in the South of Market and Mission Bay neighborhoods.

“It almost makes you not want to support expansion and growth, because it seems like the city’s infrastructure is not ready for it,” Kim said.

The supervisor asked for SFMTA officials to release a similar report every three months so the public can see if progress is being made in improving the system.

Last week, he asked the city controller’s office to assess the economic impact of a surcharge of $1 to $3 that could be added to prices of tickets for large events such as baseball games and concerts and would go toward maintaining the Muni system.