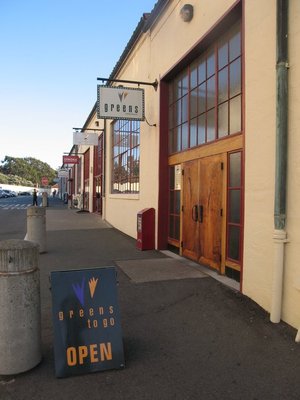 The victim of a fatal crash on Interstate Highway 280 in Daly City on Tuesday morning was a chef at San Francisco’s Greens Restaurant, executive chef Annie Somerville said today.

“He was a very integral part of Greens,” Somerville said.

She said Ueber had worked there since 2004 when he started as an extern through the California Culinary Academy where he studied. He had made his way through the ranks, advancing from lunch chef, to sous-chef to head chef, Somerville said.

The crash happened at about 8:15 a.m. Tuesday on northbound I-280 near state Highway 1 after Ueber lost control of his Honda SUV and struck the center divide.

The SUV overturned and came to rest in the far left lane. Ueber, who was alone in the car, was pronounced dead at the scene.

Somerville said Ueber had just dropped off his fiancee at work and was returning to the city.

She described Ueber as a proud San Francisco native who had attended Drew College Preparatory School.

“He just loved the city,” she said.

He also loved to cook.

“He was super responsible,” she said. “He was great at teaching people to be efficient.”

She said he had a knack for showing people how to prepare certain dishes and learn the Green repertoire.
While in the Greens kitchen, “he thought like a vegetarian,” according to Somervile—although she said he was by no means a vegetarian in his personal life.

Somerville said the staff is devastated by the loss, but that the restaurant is still open and running.

“Everyone is stepping up as he would wish us to do,” she said.