Board Of Supes To Discuss Revised Designs For New Warriors Arena 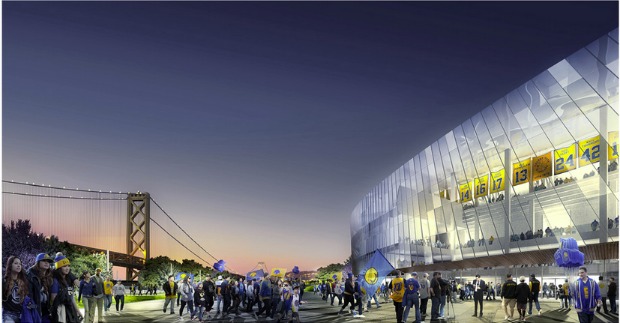 The Golden State Warriors on Sunday unveiled an updated design for their proposed new arena along San Francisco’s waterfront.

The Warriors currently play at the Oracle Arena in Oakland, but announced last year that they plan to move across the Bay to a new privately funded arena that would be built by 2017 at Piers 30-32 in San Francisco between the Bay Bridge and AT&T Park.

The updated design includes increased open space areas and access from the Bay. The design also calls for a reduction in parking spots and less retail space than what was initially proposed.

Changes include the addition of a fire station with berths for fireboats, as well as a deep-water berth for cruise ships, according to team officials.

Some luxury suites and about 750 seats were removed from the plans to allow fans to view the Bay Bridge from inside the arena. As at AT&T Park, there will also be an area where fans outside the arena can look in during games.

Warriors CEO Joe Lacob said in a statement that the updated design will “create an arena experience on the waterfront that is unique, community-focused and unlike any other venue in existence around the world.”

The project will be discussed by a San Francisco Board of Supervisors committee at City Hall this afternoon, as well as by other city and state panels in the coming weeks.

The San Francisco Waterfront Alliance, a coalition of neighbors, homeowners and others, plan to attend those meetings to voice their concerns, said Buffy Martin Tarbox, the group’s community relations director.

The group is worried that the team and San Francisco city officials are moving ahead with the plan too quickly, Tarbox said.

“Why are we rushing this process? This is a massive arena that is going to be built on our Bay and is going to be around for decades, so we have to make sure everything is done correctly,” she said.

She said the team’s plans for the waterfront are “essentially privatizing what is a public resource” and “will significantly impact those who live in the neighborhood.”

She said, “We just don’t think that city leaders and the people should be getting lost in the details of the new design. The real question is, should we build this massive sports arena on the waterfront.”

Another group, Warriors on the Waterfront, was launched last month in support of the project and has been hosting playoff watch parties during the team’s recent NBA playoff run.

The Warriors last week upset the higher-seeded Denver Nuggets in an opening round 4-2 series win and will look to continue their success when they start a second-round series tonight against the San Antonio Spurs.

Game 1 takes place in San Antonio at 6:30 p.m. PDT and a watch party is scheduled for 6 p.m. at Dobbs Ferry Restaurant, located at 409 Gough St. in San Francisco.

Renderings for the updated arena design can be found online at www.warriors.com/sf.