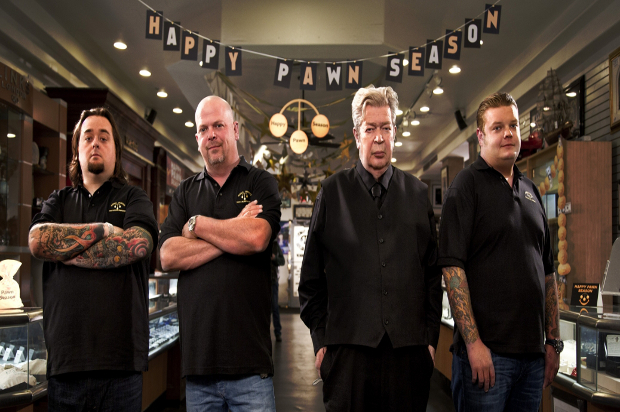 Yet another Memorial Day, the getting some over-the-shirt-under-the-bleachers action of patriotic holidays, has come and gone. But lest we forget the true meaning of Memorial Day: to remember the guy who decided to put the In Memoriam segments in award shows. You try thinking about that when you’re shoving hot dogs in your face, thinking that the reason Veterans Day is a holiday is to honor people who beat Call of Duty on the Veteran difficulty.

Wednesday, May 28
Rogue (9pm, Audience Network, season finale)
Rogue takes place in Oakland (in the same way that Romeo Must Die takes place in Oakland because ports). So of course it makes perfect sense to have Thandie Newton go undercover at said ports surrounded by characters doing a bad karaoke rendition of The Wire season two.

And I’m the last person who should assume the mantle of any sort of moral superiority, but in a city with forty homicides already, it just seems a little, tone deaf? Maybe it’s because I was/am born and bred in Oakland I’m finding this a little raw. Maybe it’s because I wish George Lucas really did draw inspiration for the AT-ATs in Empire Strikes Back from the Port of Oakland. Maybe I’m too close to the case, a hypothetical police chief might say, and she wants me off said case.

By the way, you’re only going to get Rouge if you have Directv as your television provider, as the Audience Network is their own channel.

Top Shot (10pm, History Channel, season premiere)
My only experience with guns involve touching the spent Desert Eagle cartridges my friend would bring when we were in elementary school, and getting caught up in the tail end of a drive-by shooting as I was going home from after a Mates of State show (don’t ask). And sure, watching a bunch of people do something they’re very good at can be fun. But what with recent events, I’m not sure I can watch high speed footage of bullets whizzing by while folding laundry anymore.

Rookie Blue (10:00pm, ABC)
Goddamnit Rookie Blue, I look at your trailer, and I don’t see a light hearted, procedural summer show, with vaguely soapy elements. All I see is my own unresolved sadness for Southland getting canceled playing out in front of me. (Of course you’d be a Canadian production)

Friday, May 31
Space Warriors (8pm, Hallmark Channel)
I got straight goosebumps watching this trailer. Fireworks! Children helping adults! Space camp! Danny Glover! Movies like this were the bedrock for my coming of age in the 90’s! Even if this movie doesn’t feature Danny Glover muttering that he’s getting too old for this space and claiming that somebody’s space immunity has just been revoked, if this doesn’t re-ignite interest in the space program, then I want off this rock.

Sunday, June 2
The Killing (8pm, AMC, two-hour season premiere)
Speaking of Chris Hardwick, a Talking Dead-esqe show was pitched for The Killing, but never made it because nobody wants to see an additional hour of people talking where nothing happens. Happy another season of people standing around looking sad in the rain! Let’s come back at the season finale, and see if showrunner Veena Sud makes good on her promise of wrapping up the central mystery at the end of this season, instead of infamously dragging the first central murder out over the course of two.

Personally, I’m waiting for The Bridge on FX (July 10), which is another adaptation of another European television show that involves murder.

ICYMI:
– A middle school tutor with stage III cancer arrested in meth best? It’s not so much a matter of life intimating art, or art intimating life, someone’s been reading my dream journal again!

– If you think about it, Arrested Development and The Godfather are basically the same thing.

And remember:
Countdown to final episodes of Breaking Bad: 102 days