Appealing TV: How I Met Your Mother, New Girl, The Office Series Finale, and Doctor Who 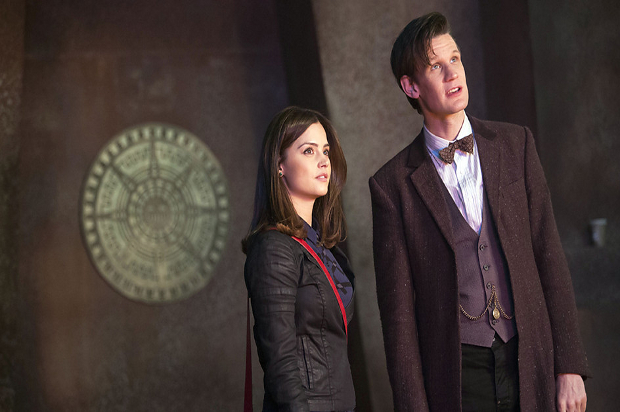 The past couple of days has been a bonanza of TV news as networks scramble to to piece together what will become the 2013 – 2014 television season for the upcoming upfronts.

Monday, May 13
How I Met Your Mother (CBS, 8pm, season finale)
Ted Mosby is empirically an awful shitbag that nobody has cared about for years now. With next season being reported as its last, perhaps Ted will fulfill his role as MacGuffin and the show will start to generate genuine momentum in finding out once and for all, how he met The Mother. Come to think about it, Ted is essentially that huge stone butt plug they thrust into the Island at the end of LOST (Spoilers? Oh come on, it’s been off the air for three years now, don’t look at me like that). Maybe that momentum can start with tonight’s finale, if the promo is to be believed.

Tuesday, May 14
New Girl (FOX, 9pm, season finale)
FOX did itself no favors by first advertising New Girl as “Adorkable.” When it was originally announced that Zooey Deschanel was going to have her own sitcom, we collectively steeled our loins for “Zooey Deschanel Plays Ukulele and Out Twees Chinese People at IKEA: The Series.” As a nation we were still nursing our 500 Days of Summer hangover and reflexively not liking Zooey Deschanel after first liking her. But what I initially saw as a healthy alternative to self-harm, morphed into a well oiled joke machine ensemble about navigating one’s early 30’s right before my eyes.

What I originally thought was a show about spin doctor and crisis managers in Washington has been retooled for its second season as a show to go MMMHMM to. At least this is my impression from the adverts that run during Nashville. Kerry Washington sexing the President? The President gets shot? The President can’t remember? This is kind of show that uses words that describe steak: juicy, sizzling, grass-fed, well-marbled, steamy (okay, more of a term to describe the steamed hams you’re serving Superintendent Chalmers). Also, Scandal has my fellow SF Appeal writer’s Rain seal of approval, as mentioned in last Friday’s Weekend Watch.

Let the record show that I would watch the hell out of a show about 90’s band the Spin Doctors as spin doctors in Washington.

Big Bang Theory (CBS, 8pm, season finale)
I had a girl in my Community College Speech class who for her final, did a persuasive speech on why the drinking age should be lowered. For her conclusion, she stated that lowering the drinking age was the new Civil Rights Movement. She seems like the kind of person that would would still decry The Big Bang Theory as a minstrel show of nerd culture. Because the words “historical perspective” have absolutely zero meaning to her.

Full disclosures ahoy: I used to work with Kamau when he was based in San Francisco teaching his Solo Performance Workshop, and he was the director of my own solo show.

Executive Produced by Chris Rock, Totally Biased combines sketch, monologue, man on the street segments, guest interviews (The show has had guests like Rachel Maddow, George Takei, and Tom Morello in the past). In so many words, Totally Biased is The Daily Show with teeth. And the theme song is written by Living Colour founder Vernon Reid!

On top of the new episodes, Totally Biased will be moving to five nights a week after FX splits itself into FXX (which focuses on comedy) in the fall. While this is amazing news for the Totally Biased team, I am regretting my “FX has the movies” chest tattoo.

The Office (NBC, 9pm, series finale)
Well, it was bound to happen sooner or later, right?

Be sure to set DVRs for a 75-minute finale. Just in case.

Friday, May 17
Maron (IFC, 10pm)
Can’t something be enjoyed on its own merits, without inciting knee-jerk comparisons to Louie? This is part of IFC’s double down on all things alt-comedy (is that even still a term), a sitcom based on Maron’s life and mega popular WTF podcast. Judd Hirsch guest stars as Marc’s father, which is good enough for me.

Once, my brother told our dad that he was thinking of becoming a doctor. My dad asked why he wouldn’t become a registered nurse, instead.

Blood of Christ bather, Testosterone Replacement Therapy user, and self-proclaimed “Young Dinosaur” Vitor Belfort faces off against San Jose local Luke Rockhold (making his UFC debut) in the main event of UFC’s eighth (for those keeping track at home) free fight card on FX, going down in Jaraguá do Sul, Brazil. Just typing that made me feel like the announcer in Street Fighter after selecting a stage.

Training out of San Jose’s American Kickboxing Academy, the Santa Cruz born Rockhold, was the last 185 pound champion for shuttered, and also San Jose based Strikeforce. Strikeforce, which was purchased by UFC parent company Zuffa in March 2011 and  languished for nearly a year before eventually put out of its misery this past January with one final fight card on Showtime.

Be sure to catch the preliminary fights on FUEL-TV at 6pm. For those not familiar, FUEL-TV is a channel when not showing UFC programming dedicates itself to showing nothing but motorcross accidents.

Sunday, May 19
Sans Bob’s Burgers and American Dad, which both wrapped up their seasons last night, the rest of Fox’s Animation Domination block are having their respective season finales tonight. Double-fisting back-to-back episodes of The Cleveland Show at 7pm (not coming back next season), The Simpsons at 8pm (chugging along), and Family Guy at 9pm (still a goddamn thing).

ICYMI:
– Combining two of my favorite things, seventeen year old girls and television, a seventeen year old girl has invented a Chrome extension that can block tweets containing the names of shows and/or characters from shows from showing up in your Twitter timeline. Take that freneimes on the East Coast who won’t stop spoiling Walking Dead that I can’t unfollow from Twitter. Just give this girl a car that runs solely on Nobel Peace Prizes.

There’s also something to be said about trying to enjoy things mindfully and letting go of this “second screen” bullshit, but what do I know?

– I am convinced that the woman who wrote the “Why Girls Hate Game of Thrones” piece on Thrillist isn’t a woman, but an AI Construct made out of rejected Teen Talk Barbie sayings and still operates on the belief that boys have cooties.

>…you can always distract us with Mad Men. Girls may hate Game of Thrones, but we love Don Draper.

You’ll have my Historical Perspective badge on your desk in the morning, chief.