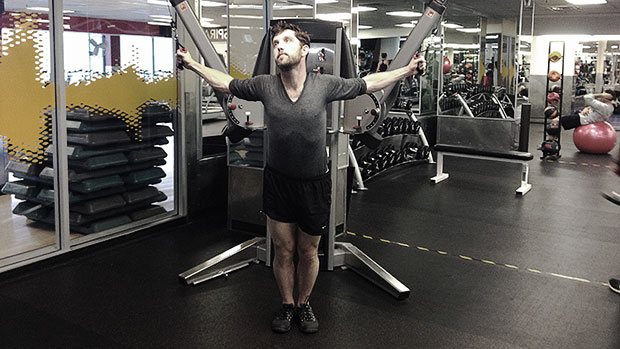 While awaiting word on whether I’ve won a ticket in the Dipsea Race lottery, no money to sign up for any other races to build a training schedule around, and a general sense of burnout after a stressful six months, my own fitness commitment has been listless and intermittent for weeks — I even missed yoga, which I paid dearly for when I finally made it back to class.

But with word from Connie Pinko and the Sisters of Perpetual Indulgence that the Hunky Jesus contest has been resurrected for a Second Coming after biblical flooding cancelled the main event on Easter Sunday, I was filled with the spirit to further sculpt my figure for loincloth season.

So when I showed up to meet my old neighbor, former boss and friend Owen Thomas at our old stomping grounds, the 24 Hour Fitness on Bay Street, and he asked, “What should we work on today?” I said “What would Hunky Jesus do?”

Being a cardio queen to his barbell king, I generally hate the weight room so I needed him whip me into shape. He chose a shoulder and abs set using GymGoal as a guide. If you don’t have a pro like a trainer or coach to prescribe you a workout regimen, apps are an inexpensive substitute to help you script your own scenes, and Owen can recommend a few more.

Because of an injured left shoulder, I took some time to discuss boundaries with Owen before we got started. With most of my range of motion restored, I’ve primarily been working on strength with my physical therapist, particularly stability. But I’m nowhere near back to where I was before the injury in my chaturanga dandasana, and I still have the fear of something catastrophic, like the old “sickening pop,” despite the reassurances of my surgeon.

Naturally, Owen decided to push my limits from the beginning with an exercise I’d never done before — and I almost immediately faced stability challenges when pushing up from the floor. My weakness was such that it was also difficult to push past the balance point from hands to feet on the way back up. That said, I was so surprised I could do them at all I managed to make it through four sets of five.

At this point in the workout, we actually did sit-ups. But we all know how to do sit-ups, right? If you’re going to be crunching your abs to compete in pageants, you’re going to want a bit more variety in the show, and leg lifts are a personal favorite so we did an equivalent set for extra credit. Besides, while sit-ups or crunches are great at strengthening the muscles higher on your abdominal wall, leg lifts get down into your lower abdominals and hips. For me, they also provide an isometric stabilization exercise for my upper arms and shoulders as I brace myself.

I was so stiff I could only manage a straight leg motion, and so off-balance I had to stabilize my torso with my arms. Yet the resulting motion required some muscle deep in my hip flexors that has always felt weak, even for even holding the simplest dandasana for more than a few moments. The psoas major? The iliacus? All I know is it was pretty brutal, and therefore probably rewarding.

Like the leg lifts, this ball jackknife was a great combination of lower abdominal and hip flexor work along with isometric shoulder strengthening. The best salve I’ve found for my fear of sudden, catastrophic injury is lots of pure resistance work specifically on balance and stability. A bit challenging if you’re not familiar with exercise balls, but fast and fun once you get the hang of it.

One Arm Clean and Jerk

Even after six months, with the last few focused on strengthening, my left arm still looks a little withered relative to my right. And the largest weight I’ve picked up at PT is only five pounds. So I was particularly nervous when we started in on the barbells. An attempt to do a clean and jerk with just the bar proved too much, so a single-arm clean and jerk was prescribed. This allowed me to vary the weight between arms if necessary, and wouldn’t let me cheat a bar up by relying on my stronger right arm. Plus it felt a little theatrical, like rehearsing a Broadway dance number.

Did I mention sit-ups are boring? We mixed some more variety into the core set by doing some more sit-ups, but this time on an incline seat. Why so many sit-up variations? Because there are a couple of ways to get yourself a six pack, and neither of them involve many actual six packs.

First, there is no such thing as “spot toning,” and the striations that appear across your waist are actually where the rectus abdominal muscle bulges between the tendinous inscriptions, so it’s one muscle, not six.

Second, remember size doesn’t always equate to strength, so if you’re competing in athletics and not aesthetics, you don’t have to look like Chris Evans to stay competitive. With those concerns out of the way, you’ll want to start by trimming subcutaneous fat, which lays between the skin and the muscle, by decreasing the amount of fat in your body generally. Second is through hypertrophy, or expanding the volume of the muscle tissue. Plan to work the above exercises into a periodization cycle and you can achieve peak abs for showtime.

Of course, to suffer a little more for your sins of vanity, your muscle definition will become most apparent immediately after intense strain, as blood flow engorges the tissue immediately after workout. So for maximum effect, a few last-minute sit-ups backstage should help make sure that my body will look cobbled like the streets of Jerusalem and cast off a halo of divine health. Ecce homo, indeed.