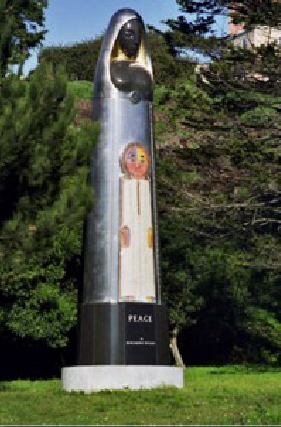 A 38-foot sculpture that has stood along Brotherhood Way in San Francisco for nearly two decades is being temporarily removed to make way for construction.

The “Peace” sculpture by Bay Area artist Beniamino Benvenuto Bufano has been situated at 700 Brotherhood Way, just south of Parkmerced, since 1996, according to the San Francisco Arts Commission.

However, the construction of 182 new residential units nearby is prompting the temporary removal of the sculpture, which portrays a conical-shaped Madonna figure.

The piece of art underwent restoration work in 2009, but “its temporary removal provides us with a good opportunity to give it a rest from the elements and to allow us to do even more extensive preservation work,” said Tom DeCaigny, the city’s director of cultural affairs.

“Peace” was created for the Golden Gate International Exposition in 1938 and was eventually placed at San Francisco International Airport 20 years later.

However, the sculpture had to be removed from the airport when the new international terminal and garages were built, and was relocated to the site at Brotherhood Way.

When it is reinstalled, it will include new lighting to illuminate the sculpture at night, according to the arts commission.