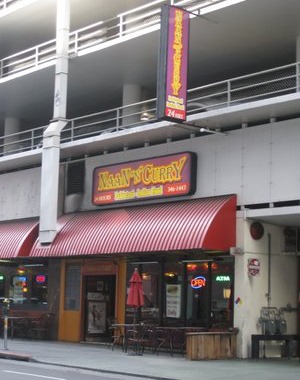 As the Chron’s CW Nevius notes today, Atique Rehman now has the dubious honor of being one of San Francisco’s “most penalized landlords in city history.” While most of you might not know Rehman as your landlord, you might have done business with him under other circumstances, as he’s also the owner of a popular San Francisco Pakastani and Indian restaurant — one that at least once has been accused of wage theft.

Nevius notes today that as owner of a 20-unit apartment complex at 308 Turk Street, Rehman has gotten “200 Housing Code violations and 38 notice of violation for a total of $38,000 in fees owed to the city – $28,000 of which was assessed since January.”

But if you page back in the Chron archives to 2001, you’ll see Rehman staring proudly from their pages, painted in quite a different light as owner and manager of O’Farrell Street’s Yelp three starred restaurant Naan ‘N’ Curry. The Chron’s review of the restaurant is positive, I think? It is kind of hard to tell.

Ten years later, Rehman seemed a lot less happy in the pages of the Bay Citizen, where in August 2011 he accused his restaurant’s staff of filing false wage theft claims against him.

After city officials awarded a Naan ‘N’ Curry staffer $6000 after allegations that he had not been paid for sick leave or for rest and meal breaks, Rehman told the BC “The Spanish employees are doing that with all the businesses around the neighborhood.” Yikes.

Rehman also told the BC that “he’s started fingerprinting his employees every time they come in to work and leave, and taking pictures and video of his workers while they are on break.”

In January of this year, BeyondChron reported on a protest in front of Naan ‘N’ Curry, in which tenants demanded that Rehman start to address the “lack of heat, lack of security, mold, leaking pipes, broken windows, and rodent infested rooms” of 308 Turk.

According to BeyondChron, “Shortly after the protest, the angry landlord went to 308 Turk and verbally asked some tenants to leave immediately. However, community leaders from Central City SRO collaborative and S.F.P.D intervened and asked Atique Rehman to leave the tenant’s apartment.”

BeyondChron reported in January that Rehman “may soon lose the building in foreclosure.” Nevius echoes that today, reporting that Rehman “reportedly told building inspectors that he’s having financial problems.”