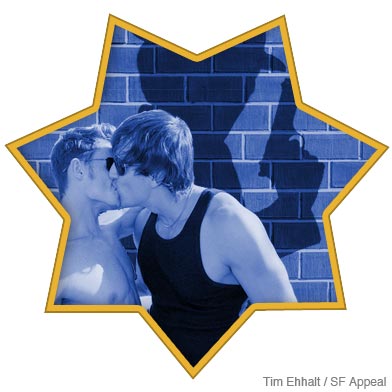 San Francisco’s police chief announced at the Mission police station this morning that that station along with the city’s nine other precincts have been designated as safe havens for members of the LGBT community to report crimes.

At a news conference this morning at the station, located at 630 Valencia St., police Chief Greg Suhr assured the LGBT community that “LGBT Safe Zone” signs posted on station windows ensure a respectful, courteous and compassionate encounter with police.

The signs are part of project that came together after an assault in the Mission District in February, where a member of the transgender community was attacked after leaving a bar, Mission station police Capt. Bob Moser said.

The colorful, bold signs indicate the station as a safe space, where victims can feel comfortable and speak to a trained professional.

“We’re a police department for everybody,” Suhr said.

He spoke about a history of distrust of police that needs to be replaced with a mentality of a progressive, accepting police force—which includes members of the LGBT community within its ranks.

The program, organized through the chief’s LGBT Community Advisory Forum that works with Castro-based organizations Castro Community on Patrol and the Sisters of Perpetual Indulgence, aims to dissuade the gay community that they will be re-victimized when reporting a crime.

Sister Pat N Leather, in full nun regalia that is the uniform of the gay community organization, said the LGBT community is suffering from an underreporting of crimes.

“You don’t have to feel ashamed of what happened to you,” the sister said. “You are a victim, we are here to make you feel safe.”

With the LGBT Safe Zone signs up at stations, community groups are also focusing on outreach about the program, Sister Pat N Leather said.

A roundtable meeting is scheduled with local transgender community leaders this summer to encourage the minority group to utilize police resources more, despite resistance.

Supervisors Scott Wiener and David Campos, whose districts include parts of the Mission, spoke out in support of increased dialogue between the police department and LGBT community.

“True public safety has to be a partnership between the police department and the community,” Wiener said.
Campos said the zones should encourage victims to speak up and quell the targeting of LGBT community members.

“One attack is an attack against all of us,” Campos said.

More information about the police safe zones is available at www.facebook.com/StopTheViolenceSF.