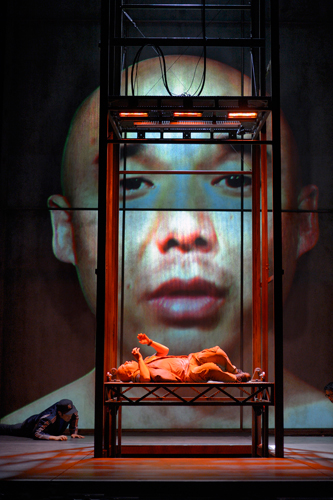 “I remember at one point I thought it might have to be a guy screaming in Chinese for an hour on stage,” says Byron Au Yong about the development of Stuck Elevator, the musical now running at ACT which he composed in partnership with librettist Aaron Jafferis.

It is unclear to what extent Au Yong is kidding about this, but in all seriousness, Stuck Elevator could use a little more of what he describes – nothing so austere as a lone howling actor, but something with a smidgen more urgency. Stuck Elevator in its current form, while at times good, is overall too mild mannered for the gravity of its subject matter.

The play is based on the story of Ming Kuang Chen, a Chinese delivery man who in 2005 became trapped in a Bronx elevator for 81 hours. Beyond the immediate nightmare of Chen’s experience, there is an additionally heart-rending and dismaying aspect to his story: the captive man refrained from hitting the police call button for fear that law enforcement would ask for his documents upon arrival, opting to remain silent and trapped instead. Chen was (and, presumably, still is) an undocumented immigrant.

Daniel Ostling builds a spare and smart set for the play: the stark frame of an elevator shaft stands centered before a screen that, depending on the scene’s mood, shows images ranging from a grim security camera feed of the enclosed man, here named Guāng (Julius Ahn), to a psychedelic tapestry bright orange slices.

As one can probably guess, Stuck Elevator did not wind up becoming a one man show –- probably for the best. Rather, the device of Guāng’s thoughts, memories, and increasingly dehydration-induced fantasies serve to usher in a host of colorful characters, including his wife Ming (Marie-France Arcilla) and son Wáng Yuè (Raymond J. Lee), who still live in China, the “snakeahead” who secured his passage to America and to whom he is now hopelessly in debt (Raymond J. Lee), and Marco (Joel Perez), his ebullient Mexican coworker at the Chinese delivery place.

As Guãng’s psychology begins to spiral, we sense his looming ambivalences about his situation: supporting a family in China with a beyond-meager salary, earned by delivering food to a country of people that seem interested only in mugging him, ignoring him, scapegoating him as an economic parasite or, if they are liberal, pitying him. Guāng declines to hit the police call button not just for fear of deportation, but because he fears he won’t be able to successfully communicate in English even if he does. If he can’t do that, Guāng thinks, internalizing the logic of his exploiters, then perhaps he hasn’t got a right to claim human rights in this country after all.

With Guāng’s hope of reuniting with his family, or even just paying off his own debt of passage, many thousands of dollars away, it becomes clear that being stuck in an elevator is more than just Guāng’s immediate misfortune: it is a metaphor for his and many others’ American immigrant experience.

Stuck Elevator is at times overt about this political undertone, as when Guāng sings “I am hunger; a building anger in the heart of this country,” but one can hardly feel it. Au Yong’s composition is at times compelling as it meanders in and out of minor keys, evokes traditional Chinese instrumentation and jibes with Jafferis’ penchant for hip hop-style lyricism, but it is too cool, eschewing the high highs and low lows (of which one would expect there to be many in this circumstance) for something more ho-hum. One does not expect big, brash Broadway from ACT, but the play’s closing song was disappointingly weak by any musical standards.

There was a point when the play could have risked a turn toward something more intense, turning up the dials of Guāng’s nightmarish experience and thus giving the question of immigration policy a jolt. Instead, at that moment it treats us to a too-silly dream sequence involving a wrestling match with Otis the elevator. In short, Stuck Elevator needs to venture a little more toward “a guy screaming in Chinese for an hour on stage.” At least give people something to talk about.