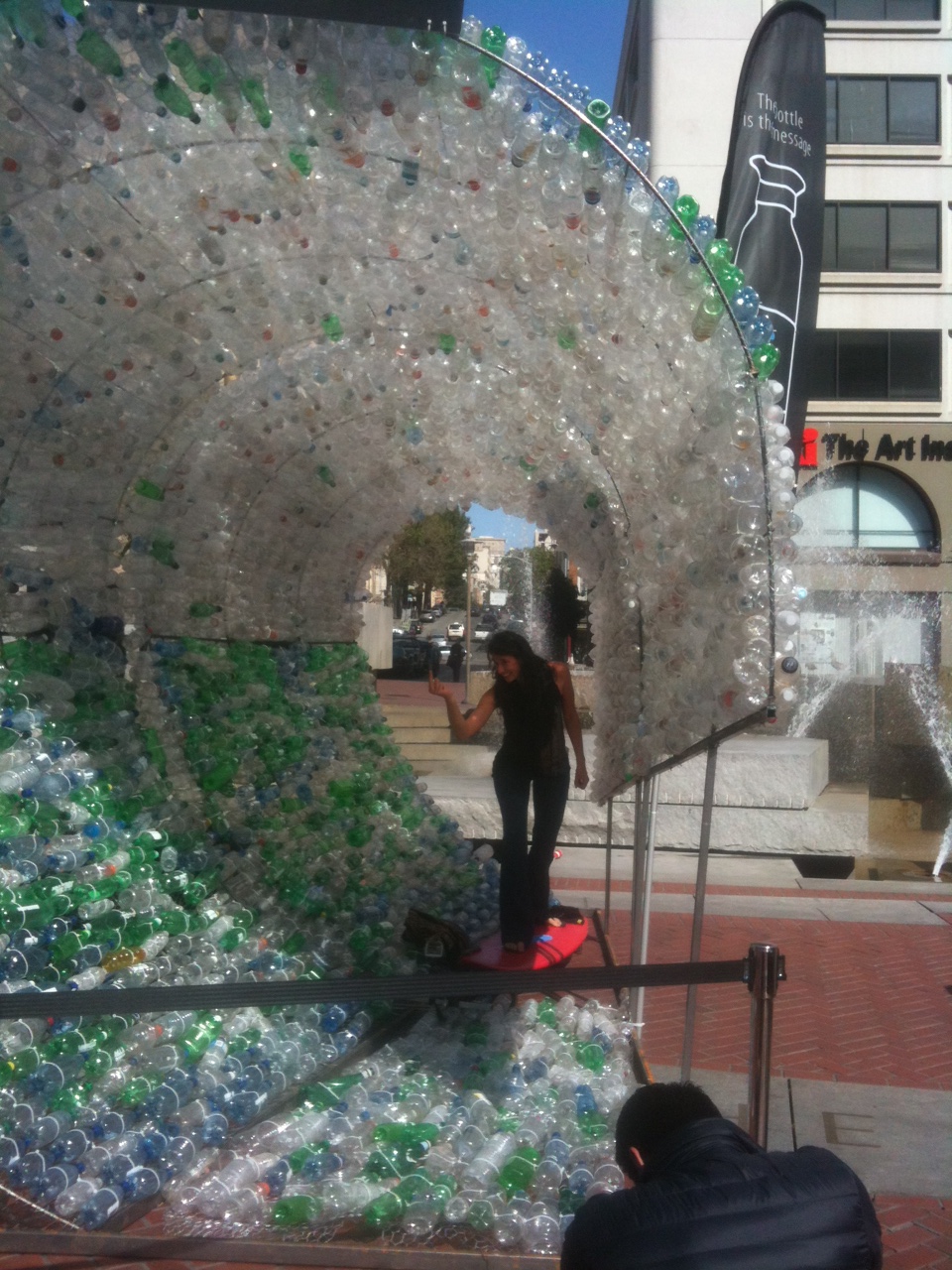 To recognize World Water Day, a giant wave made out of plastic bottles was erected at San Francisco’s UN Plaza this morning.

World Water Day was created by the United Nations in 1993 to promote sustainable water management and other water issues around the globe.

The local celebration of the worldwide day of water protection and advocacy included the 14-foot wave built out of 6,000 single-use plastic bottles on display in the Civic Center starting at 11 a.m. Friday morning.

Dopper Foundation, a Dutch-based clean water group focused on reducing plastic waste, invited passersby along Market Street to “ride” the wave on a surfboard and take a photo as part of an awareness campaign.

The wave represents the number of bottles thrown away in the U.S. every four seconds.

“We wanted to visualize it,” Irene Rompa with Dopper said this morning. “We wanted to engage the crowd.”
One participant who took photos this morning while “surfing” on the wave was San Francisco resident Genevieve Abedon, 31.

“I think plastic is one of the most evil things out there right now,” she said.

She said she is passionate about cutting back on plastic that clogs up waterways and endangers marine life.

“People are unaware of the impact of plastic,” she said. “I don’t think any more plastic needs to be created.”

He acknowledged that water consumption and storage are issues worldwide and that using less plastic bottles is an effort anyone can do.

The foundation based in the Netherlands launched their U.S. campaign today in San Francisco, partnering with the city’s Department of the Environment.

The campaign will continue at festivals across America including an upcoming event at San Francisco’s Crissy Field and an ongoing display of the wave at City College of San Francisco, according to Dopper Foundation founder Merijn Everaarts.

He said by 2016 he hopes the foundation will have spread their message and their reusable water bottles to other countries including Australia, China, and Germany.

Another San Francisco event centered on World Water Day was a celebration at a city park where improvements will save gallons of water.

This morning, improvements estimated to save over 5 million gallons of water per year were celebrated at Jefferson Square Park, located at Eddy and Laguna streets, which is one of three parks now equipped with water-saving technology.

Through a $2 million grant the San Francisco Public Utilities Commission was able to upgrade the parks’ irrigation systems, draining and landscaping.

These parks are located at Pierce and Clay streets and Ocean and San Jose avenues, respectively.