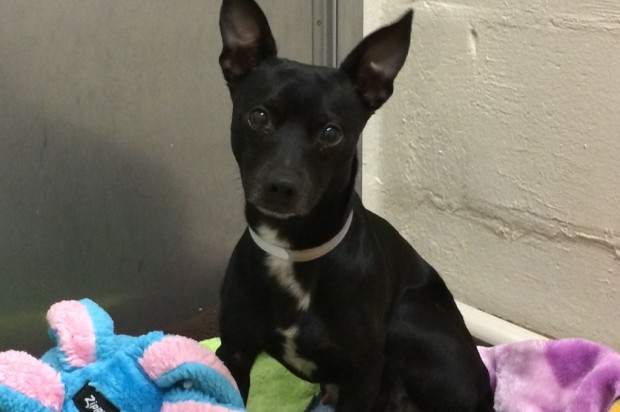 A small dog found running on the Bay Bridge Sunday is in a foster home to give him some time to rest and settle down before he is available for adoption, San Francisco animal care officials said.

Animal Care and Control spokeswoman Deb Campbell said the placement will allow the Chihuahua mix named Ponch to learn to be social again and allow him to come out of his shell.

“He’s a nervous guy,” Campbell said. She said shelter staff are not sure whether he is nervous because he had a crazy day or he’s just a nervous guy or both.

Shelter official held Ponch for five days before they decided to place him in the foster home. Some people came forward to claim him, but none could prove he was theirs, Campbell said.

Ponch was rescued on the westbound lanes of the Bay Bridge at 7 a.m. Sunday after he led the California Highway Patrol on a chase. When CHP officers caught up with the black, 2- to 4-year-old, 10- to 12-pound pooch, they took him to Animal Care and Control.

He was named Ponch after a character played by Erik Estrada on the TV show CHiPs, Campbell said.

Ponch is not neutered and he did not have any tags or a microchip to identify him.

CHP officers are not sure how Ponch got on the bridge, but they don’t think he was thrown from a vehicle because he did not appear to be injured, CHP Officer Vu Williams said. Campbell said shelter officials did not discover any injuries either.

Officers think he may have come from Treasure Island or a car stopped and let him off, Williams said.

Lots of people came to see Ponch at the shelter.

“People were knocking down the doors to see him,” which made him more jittery, Campbell said.

It’s difficult for shelter officials to say right now what kind of permanent home would be best for Ponch, until he comes out of his shell. But a quiet home with someone who has had a dog in the past would probably be best, Campbell said.