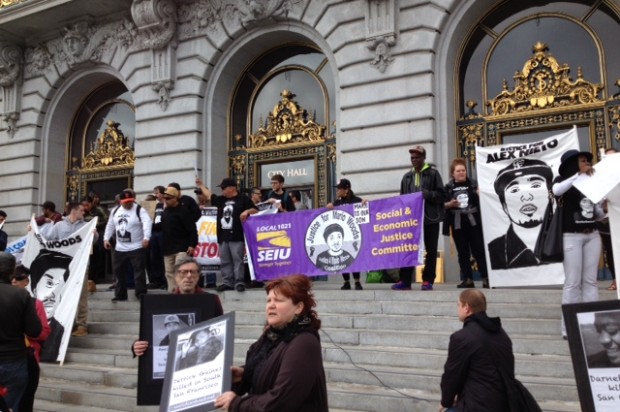 The Justice for Mario Woods, Justice for Alex Nieto and Justice for Amilcar Perez Lopez coalitions met on the steps of City Hall around 11 a.m. to announce their merging, in an effort to end what the group believes to be police violence and abuse in communities of color.

San Francisco Supervisors John Avalos and David Campos spoke at the event, along with coalition members and faith leaders.

“So long as any black person or brown person feels targeted by law enforcement or anyone else in San Francisco, it doesn’t matter what color we are, we are individually targeted as well because what happens to one of us happens to all of us,” Supervisor Campos said, addressing the crowd.

The partnership comes on the heels of a unanimous not guilty verdict by an eight-person federal civil jury on March 10, acquitting four police officers of unconstitutional excessive force for the fatal shooting of Alex Nieto.

The civil rights lawsuit was filed by Nieto’s parents, Elvira and Refugio Nieto, who also attended the rally.

“We have won because all of these people are with us. We need to be united so that this never happens to our children,” Elvira Nieto said before thanking the community for standing behind her and her family.

Nieto was fatally shot on March 21, 2014 in Bernal Heights Park. The four officers fired as many as 59 shots, striking Nieto at least 10 times, after a dog walker called 911 to report a man with a gun.

Nieto, however, was carrying a Taser stun gun and the officers testified during the trial that he pointed the device directly at them, causing them to believe the device was a gun and that their lives were in danger.

Following the shooting, police Chief Greg Suhr said the 20-year-old Guatemalan immigrant charged at the officers with a knife over his head and that officers shot him from the front.

An independent investigation and autopsy conducted by Perez Lopez’s family, however, determined he had been shot at from behind.

Mario Woods, 26, was fatally shot on Dec. 2 in the Bayview District by five police officers.

Woods, who was a suspect in a stabbing that happened earlier in the day, was holding a knife and refused to drop it. After using multiple non-lethal weapons on Woods, officers fired at him when he appeared to walk away from the officers.

The shooting generated public outrage after it was captured on video by several bystanders and was widely circulated on social media.