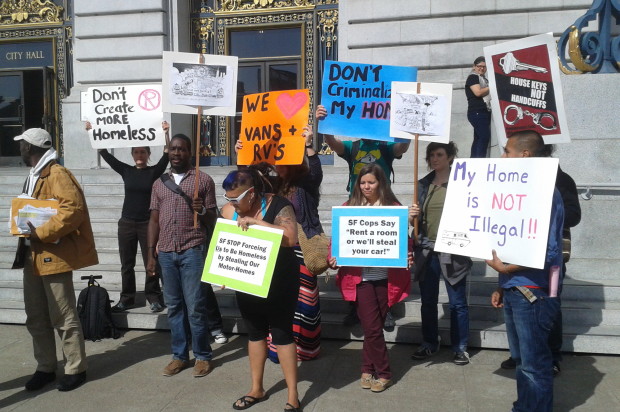 San Francisco public work crews made a concerted push to clear out homeless tent encampments along Division Street and in the Showplace Square area this morning.

The city’s Department of Public Works had about 50 people clearing and cleaning the sidewalks starting around 4:30 a.m., according to department spokeswoman Rachel Gordon. Barricades have been put up in cleared areas to prevent campers from returning.

The cleanup effort follows the expiration of notices posted by the Department of Public Health last week declaring the areas a public health nuisance and ordering homeless residents to vacate the area. Gordon said the notices only confirmed what public works crews have been reporting for weeks.

“There have been rats, mice, hypodermic needles, feces, rotting food,” Gordon said this morning. “It’s not safe or healthy or sanitary, whether you’re living in the tents or walking down the street.”

Gordon said public works crews were making an effort to be “respectful,” giving people a chance to pack up their things and relocate on their own.

She said there had been a lot of negotiations and discussions with homeless residents, with the help of outreach workers and homeless advocates, and the scene remained peaceful.

Police are on hand to provide security, but department spokeswoman Officer Grace Gatpandan said there have been no citations, arrests or other problems this morning.

The tent encampments developed this winter as homeless residents moved into the shelter of the freeway overpass along Division Street to escape rainy weather. The area also has few residents, making it a popular space for those wishing to camp, but area businesses have complained about the impact.

The city’s Department of Public Health posted the 72-hour notice to vacate Division Street between Bryant Street and South Van Ness Avenue last Tuesday, and for a four-block area near Showplace Square on San Bruno Avenue and Vermont Street between Division and 17th streets on Thursday.

Homeless outreach teams from the Department of Public Health accompanied public works crews and have been working to get people into shelter beds or other services such as drug treatment programs, department spokeswoman Rachael Kagan said.

“We’re trying to help people relocate to better, safer dwellings and not have large groups of people congregate on Division,” Kagan said.

Homeless advocates have argued that the city does not have enough shelter beds for all the people living on the street and protested the removal of property belonging to homeless residents.

The Coalition on Homelessness today posted a statement on Facebook noting that “there has been a lot of property destruction and displacement this morning.”

“Where are people expected to go?!” the statement read.

The primary answer right now is Pier 80, a 150-bed temporary shelter opened to provide extra beds during the expected winter rain. However, city officials have acknowledged that the cavernous space, which is several miles from downtown and surrounded by a barbed-wire fence, is less than welcoming.

The city also has a widely praised Navigation Center in the Mission District that provides intensive services and support in a less-regimented atmosphere designed to help homeless residents feel comfortable.

However, that facility is small and the city is still working on plans to open similar centers in other neighborhoods.

Health department figures released Monday indicate that outreach teams had contacted at least 400 people between last Tuesday and Sunday, and 90 of those people had accepted shelter beds.

As of Sunday, there were 18 beds available at the temporary shelter at Pier 80 and 11 at the Navigation Center, as well as other beds at other shelters around the city.

Kagan noted Monday that beds at the Pier 80 shelter were seeing high turnaround as people moved to other shelters or programs or chose to leave.