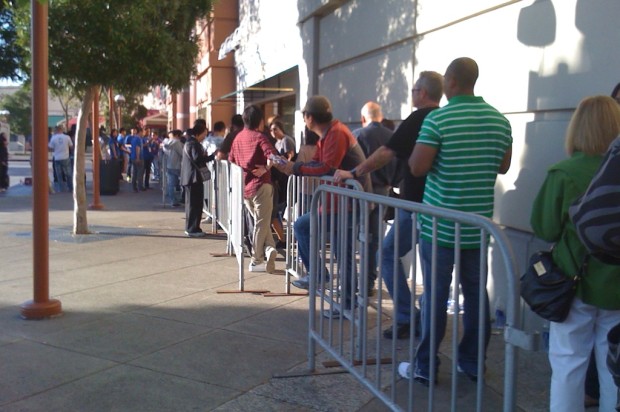 Groups are expected to gather at Apple stores in the Bay Area this evening as part of worldwide rallies against an order for the tech company to develop software to help an FBI terrorism investigation.

The rallies will take place at 5:30 p.m. at the flagship store in San Francisco and other locations in Palo Alto, Corte Madera and Santa Rosa organized by Fight For The Future, a nonprofit calling for digital rights protections.

Today’s gatherings mark one week since the FBI obtained a court order for Apple to write software that would unlock an iPhone owned by a suspect in a December shooting in San Bernardino that killed 14 people.

If the FBI receives the software, it would be an attack on civil liberties and introduce a backdoor that would affect tens of millions of people if the technology ends up in the wrong hands, Fight For The Future campaign manager Charlie Furman said.

The software would bypass Apple’s security protocols currently in place and undermining the encryption would threaten national security, Furman said.

Apple CEO Tim Cook posted a letter last Wednesday on the company’s website that opposed complying with the order, which he said would pose a threat to data security, even if the FBI has good intentions.

“Building a version of iOS that bypasses security in this way would undeniably create a backdoor. And while the government may argue that its use would be limited to this case, there is no way to guarantee such control,” Cook said.

“We simply want the chance, with a search warrant, to try to guess the terrorist’s passcode without the phone essentially self-destructing and without it taking a decade to guess correctly,” FBI Director James Comey said in a letter posted online Sunday.

People are expected to rally outside the stores this evening with signs that read “FBI: Don’t Break Our Phones” and “Secure Phones Save Lives.”

Other rallies are scheduled in more than 50 cities nationwide, including Los Angeles, New York and at FBI headquarters in Washington, D.C. Supporters outside the U.S. also planned rallies at Apple stores in Hong Kong and Munich, organizers said.