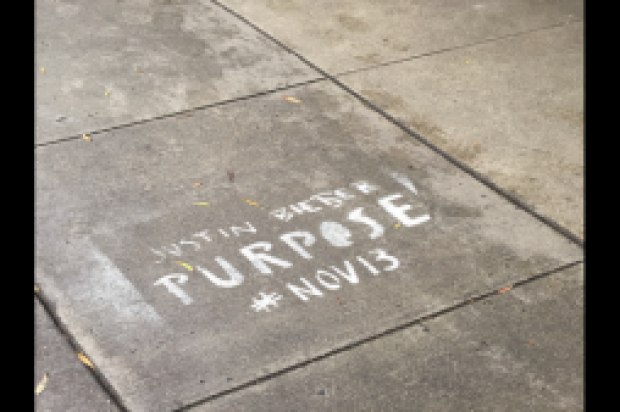 City Attorney Dennis Herrera is demanding the full cooperation of Def Jam Records and Universal Music Group to identify and punish those responsible.

Similar chalk-based illegal advertising has been an ongoing issue in the city, but the Bieber graffiti, promoting his album “Purpose” that was released last month, appears to have been applied with permanent spray paint, according to the city attorney’s office.

“This prohibited marketing practice illegally exploits our city’s walkable neighborhoods and robust tourism; intentionally creates visual distractions that pose risks to pedestrians on busy rights of way; and irresponsibly tells our youth that likeminded lawlessness and contempt for public property are condoned and encouraged by its beneficiaries — including Mr. Bieber and the record labels that produce and promote him,” Herrera wrote.

The definition of graffiti is tagging someone else’s property without permission, something San Francisco Department of Public Works director Mohammed Nuru said the record label did not have.

Herrera seeks full cooperation from Def Jam and Universal, including detailing the nature and extent of the graffiti marketing related to Bieber’s album in an effort to avoid civil litigation while resolving the full scope of wrongdoing.

Commercial vandals face civil penalties of up to $2,500 for each violation and restitution for fees and costs to the city.

A spokesperson for Universal was not immediately available to comment on the city attorney’s letter.