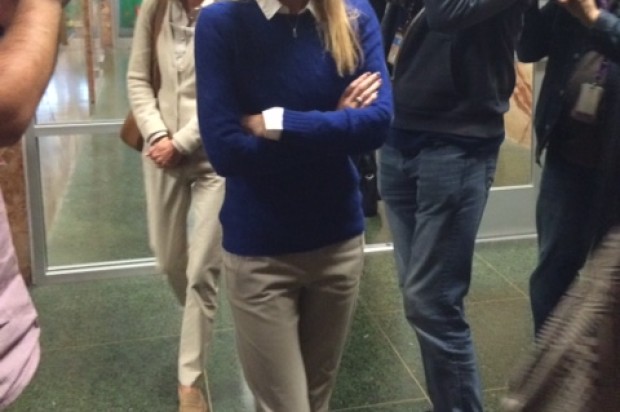 A 30-year-old woman who seriously injured two 12-year-old boys as they were walking to school in a crosswalk in San Francisco’s Marina District last week pleaded not guilty this afternoon to driving under the influence of alcohol.

The San Francisco District Attorney’s Office has charged San Francisco resident Kirsten Andereck with one count of felony DUI with injury, one count of driving with a blood-alcohol concentration of .08 percent or greater, and two counts of child endangerment with enhancements for causing great bodily injury.

Andereck was arrested on suspicion of DUI after she struck the two boys at about 8:30 a.m. Wednesday near Buchanan and Bay streets, according to police.

The boys suffered injuries initially considered life-threatening, but they are now expected to survive.

Andereck was driving a white Volkswagen Tiguan SUV and stayed at the scene of the collision, where she was later arrested.

San Francisco Assistant District Attorney Alex Bastian said today that both boys were seriously injured and that “one of the kids is in bad shape,” while the other appears to be on the road to recovery.

Bastian said he is “hopeful that both kids make a full and speedy recovery.”

She entered the courtroom today wearing a blue sweater, a white collared shirt, khakis and tan moccasins, her long blonde hair hanging past her shoulders. A host of news reporters awaited her arrival and a news camera was permitted by the judge to tape her court appearance.

Lefcourt said outside court today, “This has been an exceptionally emotional” time for his client.

He refused to comment on Andereck’s blood-alcohol level or what she had been doing before she struck the boys.

Bastian said Andereck has been charged with driving with a blood-alcohol concentration of .08 percent or greater, and that if it had been more than .15 percent, additional enhancements would have been filed.

At the request of Assistant District Attorney Thomas Ostly, Judge Flores has ordered Andereck not to operate any motor vehicle and to wear an alcohol-monitoring device.

According to yearbook records, Andereck attended St. Ignatius College Preparatory in 2001. In 2004, when Andereck was 19 years old, she was a debutante at a Cotillion event hosted by the Cotillion Club of San Francisco.

Andereck also appears to have been a close family friend to the deceased comedian and Marin County resident Robin Williams, according to local media reports following his death by suicide last year.

Her parents, Dr. William Andereck, an internist and the medical director of California Pacific Medical Center’s Program in Medicine and Human Values, and Helga Andereck appeared in the courtroom as well today.