Tour Bus That Crashed In Union Square Not Registered, Inspected By State 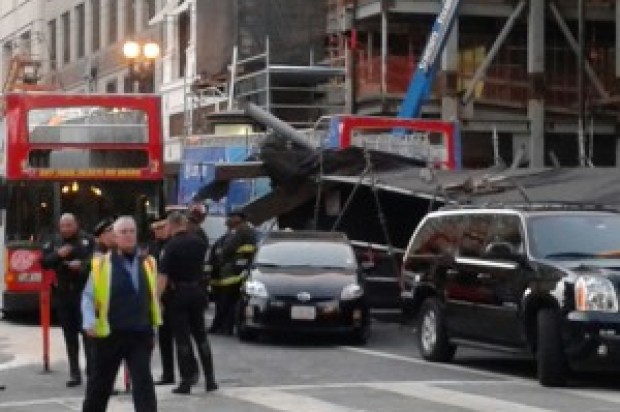 An out-of-control double-decker City Sightseeing tour bus that left 20 people injured when it crashed in San Francisco’s Union Square Friday was not registered with the California Public Utilities Commission and therefore did not undergo a safety inspection by the California Highway Patrol.

CPUC spokeswoman Constance Gordon said today that neither the license plates nor the bus were registered with the CPUC and therefore it was operating in the company’s fleet without being inspected by the state.

“That vehicle was not among the vehicles listed for City Sightseeing,” Gordon said, explaining that the company is required to inform the CPUC prior to placing a vehicle into operation.

City Sightseeing officials were not immediately available for comment on the case.

The bus was transporting passengers around the city on Friday afternoon when the bus started picking up speed in the 500 block of Post Street, then hit at least four vehicles, a bicyclist and a construction site’s scaffolding near Post and Stockton streets, according to police.

San Francisco Fire Chief Joanna Hayes-White said crews had to extricate two people from the bus, including the driver, as well as two pedestrians trapped underneath the bus and two people in vehicles involved in the collision.

Six people, including a bicyclist, were critically injured in the crash.

San Francisco police spokesman Officer Albie Esparza said today that a mechanical failure on the bus is suspected as the cause of the crash but that the Police Department is still investigating the case and inspecting the bus along with the CHP.

If there is evidence that the company may have been negligent, it would be up to the state attorney general’s office to file criminal charges against City Sightseeing.

Esparza said it will likely take the department several weeks to investigate the cause of the crash.

Gordon said once San Francisco police have completed their investigation into the crash, the CPUC will determine whether City Sightseeing has broken any laws or rules and regulations.

She said the CHP last inspected City Sightseeing vehicles in September, but that the bus involved in the crash was not inspected because it was not registered with the CPUC.

The CPUC audited City Sightseeing in 2012, but the company was uncooperative, Gordon said. The CPUC issued a $1,000 citation for failure to produce records during the audit and the company failed to pay that citation.

In November 2013, the CPUC revoked City Sightseeing’s permit, but a new, separate permit had already been given when the company came under new operation that July.

Gordon said the CPUC also conducts sting operations and investigations based on consumer complaints and other factors to ensure public safety.

San Francisco Supervisor Jane Kim stood at the scene of the crash on Monday and questioned the regulating system in place for such companies.

“We want to guarantee our roads are safe for everybody, we can’t do that if we have zero jurisdiction over a big segment of the drivers on our roads, and that includes tour buses,” Kim said.

Kim said she would like to see San Francisco share enforcement and oversight of such vehicles with the state, and said that would require a change to state law.