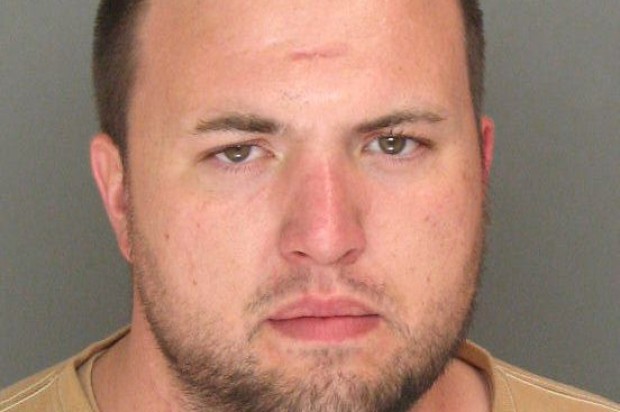 A man who was dubbed the “Mrs. Doubtfire” robber in Santa Cruz and arrested earlier this year was taken into custody again Thursday in Pacific Grove after briefly escaping from custody, officials said.

Brandon Calantoc, who has been convicted of robbery and burglary charges, walked away from an assessment for a drug treatment program at the Delancey Street Foundation in San Francisco on Oct. 28, Santa Cruz County chief probation officer Fernando Giraldo said.

Calantoc was found again on Thursday when detectives from the Peninsula Regional Violence and Narcotics Team received a tip that he was staying at a home in the 1100 block of Seaview Avenue near Higgins Park in Pacific Grove, said Monterey police Cmdr. Michael Bruno, who is part of the team.

Detectives and officers from Pacific Grove police went to the home late Thursday afternoon and arrested him without incident, according to Bruno.

Calantoc, who had been granted temporary release from jail, was driven up to San Francisco by Probation Department personnel to be interviewed for the program, Giraldo said.

The assessment is part of the probation department’s investigation to determine if Calantoc should commit to the program as part of his sentence, Giraldo said.

Calantoc was supposed to be out of custody for only a few hours and was in plainclothes for the interview, Giraldo said.

While in the waiting room Calantoc took off and somehow made his way back to the Monterey Peninsula, according to Giraldo.

Court records show a bench warrant was issued for him on Oct. 29.

Calantoc was arrested on a no-bail felony warrant for robbery from Santa Cruz County, Bruno said.

In Monterey County, he had a $240,000 felony warrant and four misdemeanor warrants – four three theft-related charges and a traffic charge — that together totaled $95,000, according to Bruno.

The 31-year-old Sand City resident received his “Mrs. Doubtfire” nickname from police after he robbed a U.S. Bank in Santa Cruz on April 3 while dressed in a wavy blond wig, prescription glasses, navy blue scrubs and a light purple long-sleeve undershirt, police said.

He was also seen acting suspiciously at Rabobank in Live Oak, where he appeared to be casing the bank an hour before the U.S. Bank robbery, according to police.

Calantoc was pulled over by Carmel police on April 20 when officers recognized him as a suspect in a series of vehicle burglaries, police said.

He was also arrested for allegedly bringing 2.1 grams of individually packaged heroin into jail and possessing a controlled substance for sale, Bruno said.

He was booked into Monterey County Jail, according to Bruno.

Calantoc had agreed to a three-year lid on his sentence, meaning that he could not withdraw his plea if he committed a new crime prior to his sentencing, Taylor said.

Seeing that Calantoc allegedly carried out other crimes, he now faces up to five years and eight months in prison, according to Taylor.