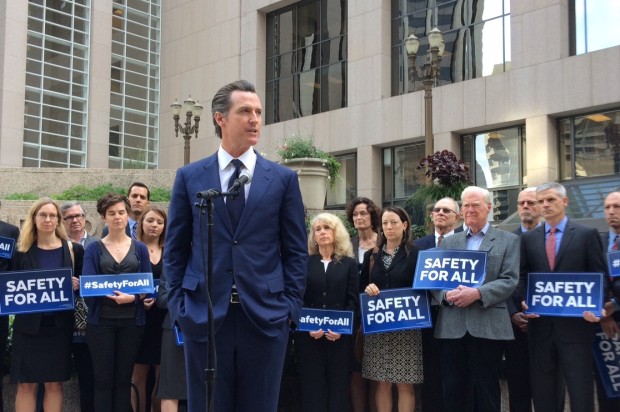 Newsom, who was formerly mayor of San Francisco and who plans to run for Governor of California in 2018, stood outside 101 California St. in San Francisco’s Financial District this morning to announce a package of “common-sense” gun control laws.

On July 1, 1993, a deadly shooting took place in a law office on the 43rd floor of the tower known as 101 California, leaving eight people dead and six wounded. The gunman then took his own life.

Out of that tragedy was formed the Law Center to Prevent Gun Violence, which is teaming up with Newsom to draft the initiative that will be filed in the next couple days.

The non-profit center has dedicated the work it does to the victims of the 101 California shooting.

Robyn Thomas, executive director of the Law Center to Prevent Gun Violence, said that legal experts have been working with the Lt. Governor to create a gun control initiative.

“This is happening everyday and it happened right here,” Thomas said of gun violence.

Newsom said that as a father he was deeply saddened and angered by the 2012 school shooting in Newtown, Connecticut that left 27 victims dead.

“With 150 school shootings since Newtown and many more mass shootings devastating communities across our state and nation, it is time to say enough is enough,” Newsom said today.

He said he was convinced that the Newtown school shooting would be a tipping point for the country, but instead he saw political struggles in Washington D.C. and an endless string of school shootings and acts of mass violence.

To the National Rifle Association, a major gun lobby in the United States, Newsom sent a specific message: “You can impact the political system, but not the initiative system.”

Newsom said, “the NRA and their powerful lobbyists repeatedly blocked laws — supported by more than 90 percent of Americans — that would save countless lives.”

Newsom said there are an estimated 34,000 guns, including an estimated 1,000 assault weapons, in the hands of roughly 17,500 people who are not legally allowed to posses them in California. He said this initiative would require those people to relinquish those firearms.

Thomas said there are five main provisions in the initiative.

The first would prevent the possession of large-capacity magazines, because they “allow people to kill far too many people at one time,” Thomas said.

The provision prohibits possession of 11 rounds or more and provides for their legal disposal. New York, New Jersey, Hawaii and the District of Columbia have already banned possession of such magazines.

The second provision would require ammunition vendors to be licensed and for instant, point-of-sale background checks to be run on anyone trying to purchase ammunition in the state.

Under this provision, if a person is convicted of a felony, a violent misdemeanor, has a restraining order, or has been declared dangerously mentally ill, they will no longer be able to purchase ammunition in California.

If passed, California would be the first state in the nation to require point-of-sale background checks.

Third is a provision that defines a clear firearms relinquishment process for those convicted of a felony or a violent misdemeanor.

The fourth provision would require firearm owners to report lost or stolen guns to law enforcement. Eleven other states, as well as the city of Sacramento already require reporting of lost or stolen firearms.

Newsom noted recent shootings that have taken place in the Bay Area as a result of stolen guns.

The fifth provision would ensure that California’s future attorney generals continue to report felons in the state to the FBI and the National Instant Criminal Background Check System, which is used to determine if potential firearms or explosives buyers are eligible to buy.

“There are loopholes in our law that we can easily close,” Thomas said today.

She said that for decades, “California has been leading the country through the passage of smart gun laws that save lives, and this initiative continues that leadership by keeping guns and ammunition out of the wrong hands.”