Appealing TV: Supergirl, The World Series (Who Cares The Giants Aren’t In It), And Ash Vs. Evil Dead 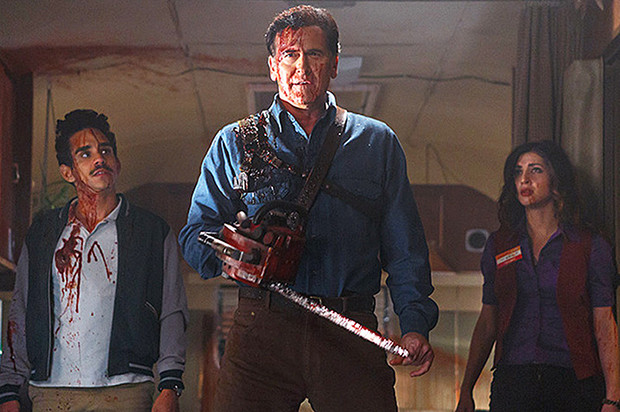 Monday, October 26
Supergirl (8:30pm, CBS, series premiere)
Supergirl is Superman’s cousin, but best believe we’re not going to be seeing much (if any) of the big blue boy scout (and after the grim-dark Man of Steel and grim-dark incoming Batman vs Superman, I’m not sure his current morose, genocide ass is wanted). Looks like we’re in for superheroic sincerity mainlined to the part of our brains that make us feel like kids again with Supergirl, and that’s fine by me.

Follow the Rules (10pm, MTV, series premiere)
Rapper Ja Rule gets a family reality show with the pitch-perfect pun title, and I am jubilant (even in a world of DVR and on-demand, I’m not sure whether to watch this or Fargo live tonight).

Tuesday, October 27
World Series Game 1 (5pm, FOX)
It’s an odd numbered year, so that means the Giants aren’t playing in the World Series, which means nobody in San Francisco gives a shit about baseball and goes back to referring to it as sportsball. This year we have the New York Mets (milestone for the club) against the Kansas City Royals (another week of having to endure Lorde’s song of the same name) in a best of seven series to see who’s the best this year.

Wicked City (10pm, ABC, series premiere)
Women! Get! Murdered! In! The! 80’s! This new crime anthology wants to pay homage to the grittiness of LA and the crimes and murders and stuff that millennials are super into (the show apparently tested well with my kind). For all intents and purposes, it’s as edgy as a distasteful Halloween costume.

Saturday, October 31
Ash vs. Evil Dead (9pm, Starz, series premiere)
Evil Dead is next on the list of things to get a continuation/adaptation TV show, and you need to prepare for quippy one-liners, a knuckleheaded Ash thirty years later, genre queen Lucy Lawless, and buckets on buckets of practical blood.

The Returned (10pm, SundanceTV, season premiere)
Finding out that the season premiere of the French zombie show about death and loss and sadness makes up for the A&E adaptation of the show is ABC’s similar take on the people-coming-back-to-life genre with Resurrection. Best believe that I am fully torqued for this to come back.

Sunday, November 1
The Librarians (8pm, TNT, season premiere)
Now that Falling Skies is wrapped, what is Noah Wyle doing anyway? Not to overshadow Rebecca Romjin and the rest of the cast of the breezy, fantasy cable show or anything, but if Noah Wyle can join the cast beyond a recurring basis, that’d be great. I mean, Falling Skies was on the large pretty dreadful, but I tuned in largely because of Wyle’s performance.