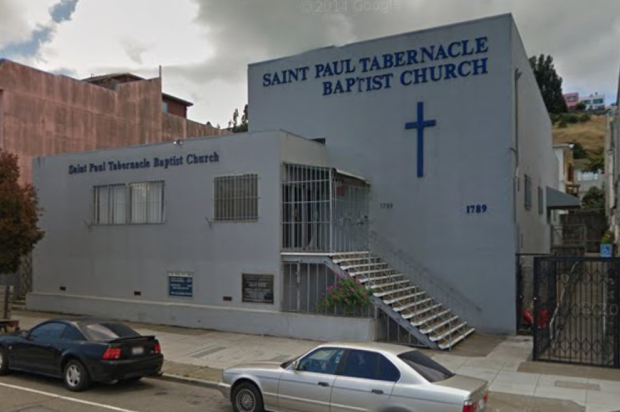 A fundraiser has been set up to help St. Paul’s Tabernacle Baptist Church in San Francisco’s Bayview District as they pay for repairs after vandals desecrated the church on Friday.

According to the fundraiser, which is being organized by Showing Up for Social Justice (SURJ), a national network of groups and individuals organizing white people for racial justice, states that the vandalism included graffiti of racial slurs inside the church, broken mirrors, and pews covered in bleach.

SURJ’s San Francisco chapter is collecting donations to show support for St. Paul’s Tabernacle Baptist Church on Oakdale Avenue and to help contribute to the costs of repairing the damage done to their community, according to the fundraising site.

Pappas said that Suhr told him the police department has launched a thorough investigation into the vandalism and would work to bring the suspects to justice.

Pappas said, “It’s important that the greater community understand what’s going on in our own backyard.”

Pappas said that this sort of display of hatred is seen across the country, but cannot and should not be tolerated in San Francisco.

She said the commission stands with church officials in urging that the perpetrators be prosecuted to the fullest extent of the law.

“The desecration of a place of worship is a vile and despicable act propelled by ignorance, hatred and bigotry,” Christian said.

According to SURJ, this attack on a black church in San Francisco’s Bayview district is part of a history of violence against black churches dating back to the 18th century.

“Black churches have always been a place of power in black communities, place of community building and organizing, even before the civil rights movement. Recent attacks on Black churches are a reaction to the empowerment of the Black community and an attempt to terrorize and intimidate Black families in a place they should feel safe,” according to SURJ.

The online fundraiser set up by SURJ to help repair the church can be viewed at:
https://actionnetwork.org/fundraising/we-stand-with-st-pauls-tabernacle-baptist-church.