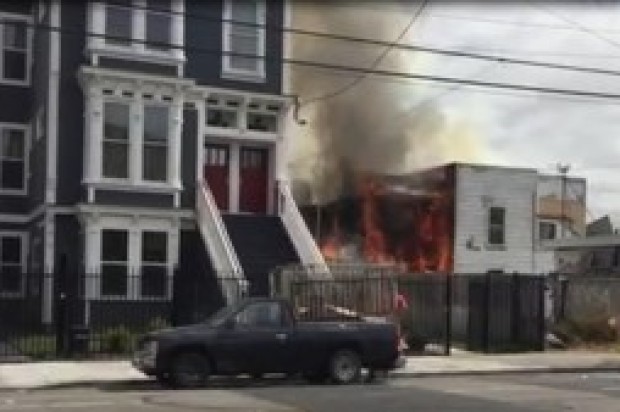 A man described by his neighbors as a loner was killed in an explosion and fire while two Alameda County sheriff’s deputies were serving him an eviction notice at the West Oakland triplex where he lived, according to people who live in the neighborhood.

Alameda County sheriff’s Sgt. J.D. Nelson said the deputies, who were accompanied by a locksmith, were entering the building in the 1400 block of Peralta Street at about 11 a.m. when there was an explosion in the rear of the home.

Nelson said the explosion set the home on fire and Oakland firefighters responded to put the fire out. The two deputies suffered moderate injuries and were taken to Highland Hospital, where they will stay overnight as part of a concussion protocol.

The tenant who lived in the triplex was found dead inside, Nelson said.

Nelson said he didn’t know if the tenant was male or female but people who lived in the building said it was a man.

Nelson said the locksmith who was with the deputies was treated for minor injuries and released but no other tenants were injured.

Nelson said it’s not yet clear if the tenant who was killed set off the explosion on purpose or if it was an accidental gas explosion.

Phillip, a man who lives across the street from the triplex but declined to give his last name, said the man who was killed “was a recluse who kept to himself.”

Phillip said the man’s first name was John and he was in his early 30s but said he didn’t know the man’s last name.

Phillip said, “I never knew he had any problems. He was always nice to me.”

John had a job but when he came home to the triplex he stayed inside, Phillip said.

Isiah Forrest said he lives in one of the upstairs units at the triplex but wasn’t at home when the explosion and fire occurred.

Forrest said the man who was killed “was quiet and kept to himself.”

Forrest’s son, who declined to give his name, said the man who was killed had lived in the triplex for about five years and was the only non-family member who lived at the building.

The son said, “I lost everything,” referring to his possessions.

The son said the man who was killed “put my family in danger” and described him as “a terrorist.”

Although the building where the explosion and fire occurred was old, Phillip said there are several new apartment buildings in the neighborhood, including one next to the site of the incident and one across the street.

The people who lived in the building where the explosion and fire occurred have been given vouchers for housing to live in while the building is repaired, Phillip said.