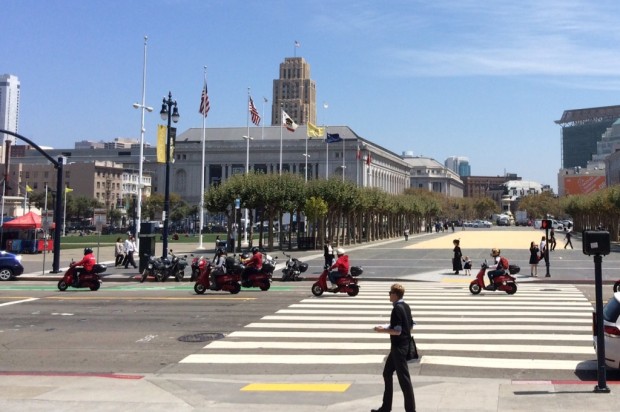 A herd of red mopeds driven by employees and customers of San Francisco-based Scoot Networks tooted their horns and circled Civic Center Plaza this afternoon prior to a San Francisco Municipal Transportation Agency board meeting where they urged the board not to remove on-street scooter parking that is threatened by a new residential permit parking area surrounding Alamo Square.

Scoot founder and chief executive officer Michael Keating, who attended the rally and SFMTA board meeting today, said the reason Scoot members and employees came out to voice their concerns today was because a new residential permit parking area, Area Q, is in the works in the Alamo Square and North of the Panhandle neighborhoods that threatens to bar Scoots from freely parking on city streets.

Scoot members rent scooters in half-hour increments and are able to pick up a scooter at one location and drop it off at a different on-street or off-street location. The new Area Q residential permit parking program threatens all on-street parking in the neighborhood.

Currently, Scoots are parking on roughly 50 streets in that neighborhood and if the board moves forward with the new residential permit parking area without granting a special permit for Scoot or exempting them, Scoot customers will have a much tougher time accessing Scoots, Keating said.

The fact that San Francisco residents are getting rid of their cars or choosing not to buy cars, Keating said, should be enough of a reason for the SFMTA to allow Scoots to park in neighborhoods with residential parking permits.

Keating said Scoot has riders who live in areas that require residential parking permits and therefore can’t park mopeds on their own streets.

Scoot has thousands of active riders and collectively logs more than 70,000 miles each month, according to Scoot spokeswoman Carly Keller.

Scoot employees say the city should accommodate the moped-sharing service considering it helps remove cars from city streets, eases traffic congestion and is a zero-emission vehicle.

SFMTA spokesman Paul Rose said the agency recognizes that “this is a viable and relevant transportation mode,” but said under state law, the electric motorscooters are considered motor vehicles and are not exempt.

SFMTA’s director of transportation Ed Reiskin, stated in a letter to Scoot that the agency is “undertaking a thorough review of how we manage residential parking permits in the City. Among the topics we’re studying is how neighbors who do not own vehicles could have more convenient access to shared ones.”

Reiskin said that the quiet and small Scoots are “a very attractive transportation option in a dense urban environment like ours where curb space is limited.”

The SFMTA expects to present their initial research findings with the SFMTA Board of Directors in November and preliminary policy options next spring.

“That is not soon enough,” Keating said today, explaining that Area Q is expected to begin in September, thus forcing Scoots off the streets.

McCaland said he uses Scoot almost everyday to get around the city for both work and pleasure.

He said not only does it save him time and money getting around the city, but that the all-electric mopeds are eco-friendly and they’re fun to ride.