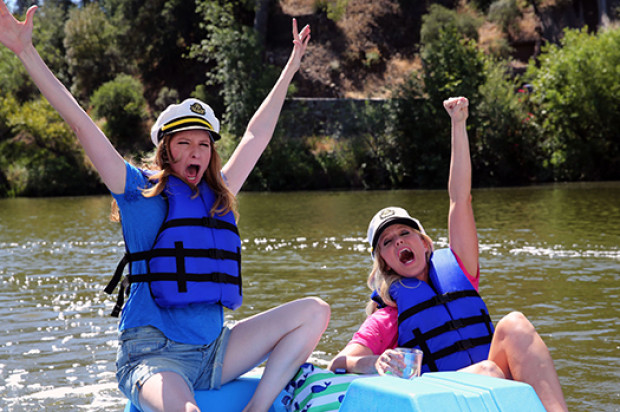 Monday, August 3
Significant Mother (9:30pm, CW, series premiere)
I couldn’t tell if the premise of Significant Mother (twenty-something finds out mom [played by Baywatch’s Krista Allen] is having sex with best friend while twenty-something’s dad tries to win his mom back) was an adaptation of a telenovela (much like the beloved Jane the Virgin). Turns out it was homegrown here in America (by way of CW’s Seed digital network). So yay, original wacky premises made in America, I guess? Also, way to take the mantle of season one of Cougar Town.

Tuesday, August 4
Playing House (10pm, USA, season premiere)
The time last year, Playing House was winding down its freshman season and its eventual renewal from USA felt like the Cuban Missile Crisis of wonderful cable sitcoms, so much so that USA has been incorporating it into its season two promotional materials (which means USA was either going to renew it all along and stringing us along or they are incredibly un-self aware). Either way, very, very glad to have Lennon Parham and Jessica St. Clair on our screens.

*no affiliation to the Dallas Buyers Club

Wednesday, August 5
Lucha Underground (8pm, El Rey, season finale)
Lucha Underground came out of nowhere and established itself as not only the best wrestling show on television, but one of the best shows on television. Period. Lucha Underground is an over-the-top pulp show about dragons welding nunchuks, the undead, and ancient Aztec prophecies, all wrapped wrapped as a primer to Lucha Libre. It’s a platform for some of the best indie wrestlers working today on top of being a great show for representation of people of color.

Mr. Robinson (9pm, NBC, series premiere)
Craig Robinson’s post-Office sitcom finally gets a release, and it will probably be gone before anybody remembered it was a show about a musician turned middle school teacher.

Thursday, August 6
The Daily Show with Jon Stewart (11pm, Comedy Central, series finale)
Much like the Doctor, Jon Stewart will end his run on The Daily Show (which started in 1999) only to regenerate a few weeks later into Trevor Noah. Also this weekend, Outside Lands’ comedy tent will be featuring members from the Daily Show news team, Bay Area natives Al Madrigal and Hasan Minhaj along with Jordan Klepper.

Friday, August 7
The Comment Section
First, social media ruined journalism, and now it’s going to ruin snarking on current affairs on television. Executive produced by The Soup’s Joel McHale, The Comment Section is like The Soup, except it’s casting its net into the far reaches of the internet to everyday jabronis just trying to be witty about popular culture.

Saturday, August 8
America’s Next Weatherman (11pm, TBS, series premiere)
Funny or Die presents this self-explanatory and self-aware reality competition series that seeks to crown a winner to present the weather on CNN and who will probably be the next victim of a TJ Miller messing with local morning news broadcasts.

Sunday, August 9
True Detective (9pm, HBO, season finale)
Oh goddammit, True Detective. It’s not even about comparing your second season to your first! I can fully rationalize that this is a completely different show. It’s just as a completely different show, the only way I can even begin to “enjoy” (in the loosest sense of the word) what’s been on my screen for the last few weeks is that this entire season has been a work — a Room of police procedurals, a Twin Peaks send-up of Tough White Males™. And now it’s going out on a 90 minute episode just to test everybody’s patience one more time.