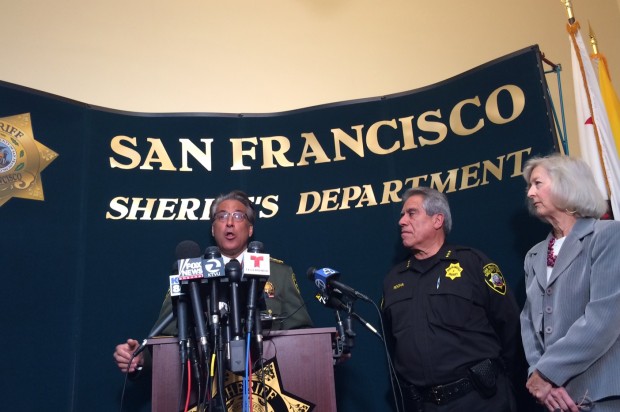 San Francisco Sheriff Ross Mirkarimi today defended the release of an undocumented immigrant accused in the shooting death of a 32-year-old woman at a San Francisco pier last week, saying federal authorities seeking his deportation should have obtained a court order as required by San Francisco law.

Lopez-Sanchez, who has used numerous aliases and numerous birth dates on his legal records, has previously been deported five times and has a history of felony convictions, including four involving narcotics, yet he was not handed over to U.S. Immigration and Customs Enforcement and instead released onto the streets of San Francisco.

Mirkarimi held a press conference today to dispel what he described as the “significant amount of distortion” regarding the case.

He explained that the sheriff’s department was required by San Francisco’s sanctuary city policy and the city’s 2013 Due Process for All ordinance on civil immigration detainers to release Lopez-Sanchez.

Mirkarimi said he had previously met with both U.S. Secretary of Homeland Security Jeh Johnson and deputy secretary Alejandro Mayorkas and informed them that a judicial order or a warrant would be required prior to the release of any person from San Francisco Sheriff’s Department custody to ICE authorities.

ICE had known of this policy since the ordinance was passed in 2013, Mirkarimi said, yet failed to obtain a judicial order or warrant for Lopez-Sanchez. Mirkarimi said Lopez-Sanchez should have been ICE’s highest priority due to prior deportations and felony convictions, yet no court order was issued.

San Francisco’s policies are not unique, Mirkarimi said, explaining that hundreds of other municipalities across the country have rejected ICE detainers as legal means to detain undocumented inmates who are otherwise eligible for legal release.

Two federal courts have ruled that civil immigration detainers are issued without probable cause and therefore violate the U.S. Constitution’s Fourth Amendment.

Mirkarimi said that when his office was contacted by the Federal Bureau of Prisons in Victorville on March 23 inquiring about a bench warrant out of San Francisco stemming from Lopez-Sanchez’s arrest for selling $20 worth of marijuana at United Nations Plaza in 1995, his office confirmed the warrant and Lopez-Sanchez was transferred from federal prison to San Francisco County Jail.

The San Francisco court dismissed the 20-year-old charges against Lopez-Sanchez and the sheriff’s department held him in custody for another two weeks while they tried to determine if Lopez-Sanchez had any outstanding warrants.

Because ICE failed to get a judicial order or warrant, Mirkarimi said that on April 15, Lopez-Sanchez was released onto the streets of San Francisco.

When asked if he would have done anything differently knowing that Lopez-Sanchez would go on to become the key suspect in a homicide, Mirkarimi said he would have gone down to ICE’s offices on Sansome Street and tell them to do their jobs and get the court order.

Mirkarimi said that ICE needs to provide warrants or court orders, but said that there are indications that ICE is understaffed and doesn’t have the resources to handle such tasks.

In the first six months of 2015, Mirkarimi said his department has not honored any ICE detainers, yet ICE continues to issue them and fails to get court orders.

San Francisco’s Due Process for All law prohibits San Francisco authorities from keeping a person in custody solely based on their immigration status, unless an individual has a prior conviction for a violent offense.

San Francisco Mayor Ed Lee said he has made sure that no legislation eliminates the sheriff’s “ability to make a case-by-case determination about honoring U.S. Immigration and Customs Enforcement detainers.”

Lee said the sanctuary city policies should not create a safe harbor for convicted, violent felons.

But Lopez-Sanchez wasn’t convicted of any violent felonies.

Under the Priority Enforcement Program, ICE officials must specify that the undocumented immigrant in question is subject to a final order of removal or that there is other sufficient probable cause to find that the person is a removable alien.

Following the Nov. 20, 2014, creation of the Priority Enforcement Program, Secretary Johnson stated in a memo that, “Due to limited resources, DHS and its Components cannot respond to all immigration violations or remove all persons illegally in the United States” and must “ensure that use of its limited resources” is devoted to the pursuit of national security, border security, and public safety.

As a five-time deportee, Lopez-Sanchez posed the highest civil immigration enforcement priority, but ICE failed to get the necessary court order to remand him into their custody for deportation, Mirkarimi said.