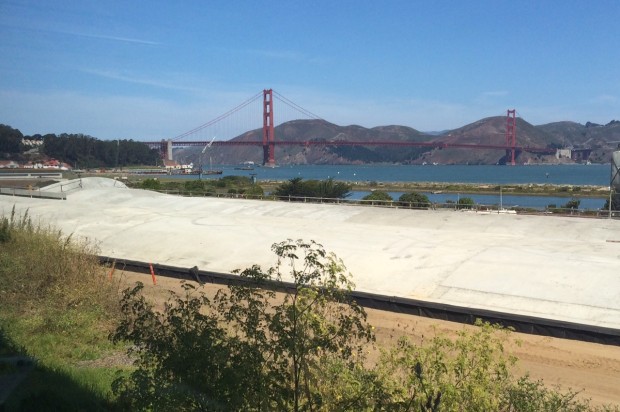 Following a 71-hour closure of the roads connecting the Golden Gate Bridge with the Marina District, the Presidio Parkway opened to traffic Sunday night and will soon be transformed into the city’s newest parklands by the designers who created New York City’s elevated High Line park.

The $1.1 billion Presidio Parkway project that has been decades in the making and spurred by the need to make Doyle Drive seismically safe, now features two sections of tunnels that will be landscaped over and allow for pedestrians and cyclists alike to access the waterfront from the Presidio parklands.

Andrea Lucas, a landscape architect with the National Park Service and the Golden Gate National Recreation Area was among those who attended the opening ceremony and ribbon cutting this morning with public officials and those who contributed to the opening of the new roadway.

Lucas said the High Line’s architect, James Corner, is working on the designs for the 13 acres atop the tunnels that will connect the Presidio’s Main Post with Crissy Field.

However, those hoping to walk and bicycle atop the freeway will have to wait, as estimates for completion of the project range between 2016 and 2018.

Tilly Chang, the executive director of the San Francisco County Transportation Authority, praised the artistic nature of the new infrastructure at the opening celebration today.

Funding for the project was also boundary-pushing, Chang said, explaining that a state, federal and private sector partnership was required for the project to come to fruition.

Michael Boland, chief of planning, projects and programs at the Presidio Trust, said today that the new Doyle Drive removes the barrier between the waterfront and the Presidio, further improving the national park.

Boland said the marshlands near Crissy Field would also be expanded during the project.

According to Gary Kennerley, an engineering manager for the firm Parsons Brinckerhoff who worked on the Environmental Impact Report for the Presidio Parkway, said that with the expansion of the marshlands near Crissy Field, the marsh is expected to become self-cleaning and self-sustaining.

The excavation of the Presidio Parkway also led to the discovery of a plant formerly thought to be extinct in the wild. During excavation, the Franciscan Manzanita was discovered and the endangered plant is now receiving much-needed protection and care.