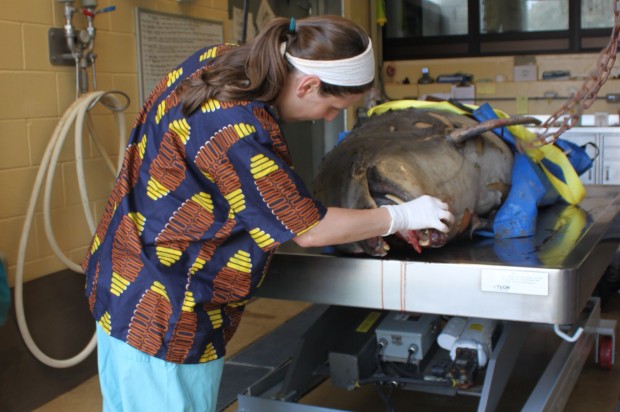 Biologists with the Marine Mammal Center performed a necropsy Tuesday on a bottlenose dolphin found dead on Ocean Beach Monday afternoon, but how the dolphin died remains unclear, a center spokeswoman said.

The dolphin was found Monday and taken by the National Park Service to the Marine Mammal Center for a necropsy. But aside from learning that the 755-pound dolphin was an adult female and not an adult male as originally thought, the necropsy was inconclusive because the carcass had already significantly decomposed, center spokeswoman Laura Sherr said today.

A dead elephant seal was also found on Ocean Beach on Monday and biologists with the California Academy of Sciences responded to collect samples from that carcass, according to the Marine Mammal Center. It is not uncommon to find seal and sea lion carcasses on San Francisco beaches, center officials said.

While dolphins and porpoises are a common sight in ocean waters around the Bay Area, the dolphin was only the 12th beached bottlenose dolphin the Marin Headlands-based Marine Mammal Center has encountered in its 40-year history.

“Every stranding represents an opportunity for us to learn more about this species and our ocean environment,” Marine Mammal Center research biologist Lauren Rust said in a statement.

Had the dolphin still been alive, the center may have worked to rehabilitate it, as it did in 2004 when a dolphin named Baker D was found stranded on China Beach.

The dolphin was too weak to swim so veterinarians equipped him with floatation devices as he regained his strength. It took two months to nurse Baker D back to health, and he was released with a satellite tracking device and has been spotted happily swimming in the waters off Southern California.

The Marine Mammal Center asks anyone who encounters sick or injured marine animals to keep a safe distance of about 50 feet, keep dogs away and contact the center right away at (415) 289-SEAL.