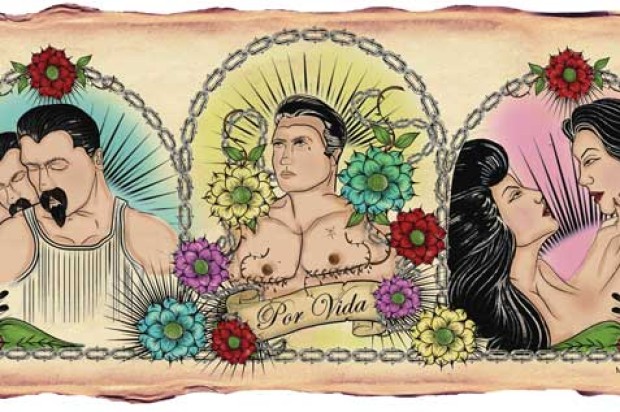 San Francisco Supervisor David Campos is hosting a unity rally this evening to support a colorful mural illustrating queer love in the city’s Mission District that was vandalized late Monday night for the third time since its unveiling last month.

The unity rally aims to support the LGBT mural created by the Los Angeles-based Maricon Collective at Galeria de la Raza that was spray painted over twice, and in the most recent act of vandalism, set on fire Monday.

Members of the LGBT rights and arts communities are planning to meet with Campos at 6 p.m. today on the sidewalk in front of the desecrated mural at Galeria de la Raza, located at 2857 24th St. near Bryant Street.

Former state Assemblyman Tom Ammiano and numerous LGBT organizations are expected to attend the rally, according to Campos’ office.

All three acts of vandalism against the mural are being investigated as hate crimes, according to San Francisco police spokesman Officer Albie Esparza.

Manuel Paul of the Maricon Collective created the artwork, a digital mural titled “Por Vida” or “For Life,” which was unveiled by Galeria de la Raza on June 13 on the side of a building next to the gallery.

The mural depicts three scenes mixing queer and low-rider culture. One scene shows two men together, another shows a transgender person and the third shows two women together.

The most recent act of vandalism was reported at about 11:20 p.m. Monday. The suspect allegedly set fire to the mural before fleeing the scene, Esparza said.

A good Samaritan doused the fire with a fire extinguisher before it spread to the rest of the building, according to Esparza.

The arsonist had set fire to the part of the mural depicting two men together.

Esparza said that on June 16 and then again on June 21, the mural was vandalized with graffiti.

Police do not have video footage of the first act of vandalism, but video surveillance equipment was installed prior to the second act, and footage from that incident captured an image of a suspect wearing a black hoodie.

The footage captured Monday showed a male suspect between 20 and 40 years old who is either Hispanic or white. He is covering his face with a black cloth and wearing a black sweatshirt, black pants, white tennis shoes and white gloves, according to Esparza.

Following the most recent act of vandalism, Galeria de la Raza’s executive director Ani Rivera released a statement explaining that the gallery condemns the “act of terrorism to try to yet again silence Chican@/Latin@ LGBTQ visibility.”

While no one was physically hurt in any of the incidents, Rivera said the most recent act of arson caused “emotional trauma” for neighbors and endangered the lives of families living in the building.

Rivera said the gallery will host a community conversation on July 18, and that event details will be announced soon.

A fundraising campaign, to restore the mural for the third time, has been set up at https://donatenow.networkforgood.org/1392515.