Appealing TV: Oh Hell No, Sharknado 3, I Am Cait, And White People, Amirite?

Ancient Aliens Dating Naked Degrassi: The Next Generation Home Free I Am Cait Knock Knock Live Life on the Reef Man vs. Child Race to Escape Rick and Morty Sharknardo 3: Oh Hell No! The Messengers Twinning UFC on FOX 16 White People by Paolo Sambrano | July 20, 2015 1:04 am | in Culture | 0 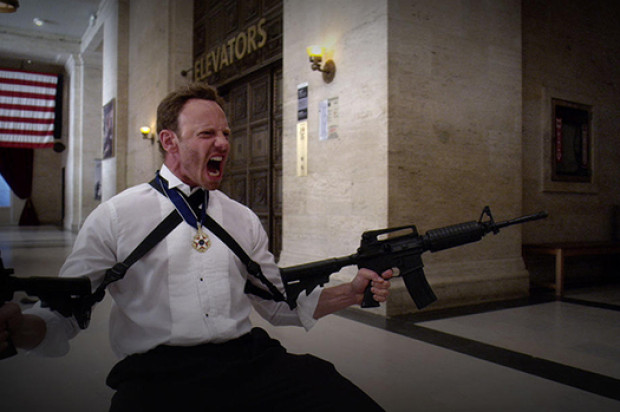 Monday, July 20
Degrassi: The Next Generation (9pm, Teen Nick, summer season premiere)
The long-running teen drama makes its summer premiere, and is the kickoff to a two week finale event, airing with new episodes every night.

Tuesday, July 21
Knock Knock Live (9pm, FOX, series premiere)
Hosted by Ryan Seacrest, Knock Knock Live has people door-knocking on seemingly random strangers doors for a chance to win money and who knows what could happen since it’s live! It appears to have the schmaltzy feel goodness of It’s A Wonderful Life, with the banality of Minute It To Win It, along with the “hey whatever happened to those Publishers Clearinghouse commercials, they did the same thing” nostalgia value.

Wednesday, July 22
Life on the Reef (8pm, PBS, series premiere)
Australian documentary miniseries that spent a year exploring the natural majesty of the Great Barrier Reef. It’s no Sharknado, and that’s probably for the better.

White People (8pm, MTV)
I mean, white people, amirite? Not an adaptation of 2004’s Handsome Boy Modeling School, but a special from documentarian/journalist Jose Antonio Vargas (known for his documentary Documented) as he tries to explore race relations and white privilege. With just the trailer being released, white people tears and awkward cringes (so this is what it’s like to watch the UK Office) are already flowing along with criticism from Rush Limbaugh, who’s already bloviating and dismissing it as a documentary MTV paid an illegal immigrant to make. Real smooth. Hopefully it’s not just a two hour supercut of white people saying “I’m not a racist but…”

Dating Naked (9pm, VH1, season premiere)
The dating show that leaves nothing to the imagination (or the blurring budget at Viacom) returns along with the series premiere of Twinning (10pm, VH1) where sets of twins compete to win $222,222.22.

Sharknado 3: Oh Hell No! (9pm, SyFy)
The Instagram filter of a “so bad it’s good” movie, returns, with the titular sharknado coming for the eastern seaboard, from Washington DC to Florida. The Sharknado franchise is the best thing to happen to the managers and publicists to D-list celebrities everywhere because, along with returning stars Ian Ziering and Tara Reid (Sharknado is their perpetual True Detective season one), a litany of random people show up, including Mark Cuban (as the President of the United States), Ann Coulter (as the Veep), David Hasselhoff, Bo Derek, Lorenzo Lamas, Jerry Springer, and former congressman Anthony Weiner. Sharknado is the hot dog stuffed pizza crust pizza of movies – a perpetual wink-wink-nudge-nudge of media pandering. SyFy and its advertisers thank you for your basic ass snarky tweets in advance.

Thursday, July 23
Man vs. Child (9pm, FYI, series premiere)
If only this show was the best part of the season two premiere of True Detective with Colin Farrell menacing young children or Jackie Chan beating up kids in the Karate Kid remake. In reality, it’s the age-old question of “what if the contestants in Top Chef and Masterchef Jr took each other on?” in a fevered fantasy cooking competition show booking dream.

The Messengers (9pm, CW, series finale)
Despite CW’s renaissance as a network over the past couple of years, the network still had a couple of clunkers on its line-up. The show about people who were granted powers and linked together to stop the Rapture was canceled and the rest of it’s episodes burned off on Friday night.

Saturday, July 25
UFC on FOX 16 (8pm, FOX)
MMA can be a fucking garbage fire of a sport, but it can still bring us things like this past UFC 189. In this fight card coming from Chicago (expect lots of cutaways to former WWE Superstar/MMA fighter in training CM Punk) Sacramento’s own TJ Dillashaw defends the bantamweight championship against Brazil’s Renan Barao in a rematch of their 2014 fight where Dillashaw took the championship from Barao. Previously, Barao was undefeated for nearly a decade. Besides that, Barao is also known for his hip-based post-fight victory dance:

Race to Escape (10pm, Science, series premiere)
Those room escape live events give me the fucking social anxieties. It’s kind of like not being able to see a Magic Eye portrait but instead of keeping that shame to yourself and trying to lie about it, it’s in full display of everybody, and because of that, it’s all your fault nobody was able to get out in time, and you have to live with that. Anyway, Race to Escape is the television game show adaptation of that (room escape live events, not my crippling social anxiety), hosted by comedian Jimmy Pardo.