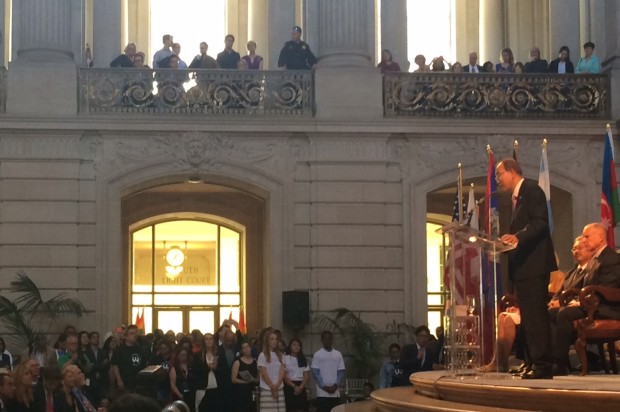 United Nations Secretary General Ban Ki-Moon gathered with California’s elected officials Friday to celebrate the creation of the Charter of the United Nations in San Francisco 70 years ago to the day and he pledged to continue the fight for human rights and to protect the roughly 60 million refugees worldwide.

The charter, which according to its preamble aims “to save succeeding generations from the scourge of war,” was signed on June 26, 1945 in San Francisco following the United Nations Conference on International Organization, and it includes the Statue of the International Court of Justice.

The charter’s preamble also states the determination to “reaffirm faith in fundamental human rights, in the dignity and worth of the human person, in the equal rights of men and women and of nations large and small.”

Ban Ki-Moon said that “the charter is our compass” and that while “today we take the idea of the United Nations for granted,” it is important to remember that the creation of the delegation 70 years ago was no easy feat.

To the roughly 60 million refugees globally, Ban Ki-Moon had a message, “Don’t despair, you are not alone,” he said, adding that the members of the United Nations aims to support them in their time of struggle.

Ban Ki-Moon made special note of the ruling by the U.S. Supreme Court on marriage equality and congratulated the United States on taking a great leap forward for human rights.

Pelosi also expressed her enthusiasm for the Supreme Court’s ruling, paraphrasing Martin Luther King Jr. at the celebration when she said that “The arc of history bends slowly, but it bends towards justice.”

Following the celebration, Antonio de Aguiar Patriota, the permanent representative of Brazil to the United Nations, said that there are many documented human rights violations by Syria’s Bashar al-Assad regime, by ISIS groups and by members of the Syrian opposition.

Patriota echoed statements that Ban Ki-Moon has previously made, urging the international community to put in place an arms embargo in Syria.

“But in the absence of a political solution,” Patriota said. “I am afraid that many of these violations will continue to take place.”

Ban Ki-Moon said that in addition to the human rights violations occurring around the world, the international community must do more to fight climate change. He praised California for being an environmental leader.

Outside City Hall, however, environmental activists gathered to urge Gov. Brown to ban hydraulic fracking in California, arguing that the process is harming the state’s clean water supply.

Barbara Stebbins, an environmental activist, said the California regulatory agency, the Division of Oil, Gas and Geothermal Resources (DOGGR), has always had a “cozy relationship with oil companies” and has failed to protect California’s aquifers.

Earlier this month, the Committee to Protect Agricultural Water filed a civil Racketeer Influenced and Corrupt Organizations complaint in federal court alleging that Brown’s office ordered DOGGR to approve permits to oil companies to allow injection of salt water into fresh water, in violation of the Safe Drinking Water Act.