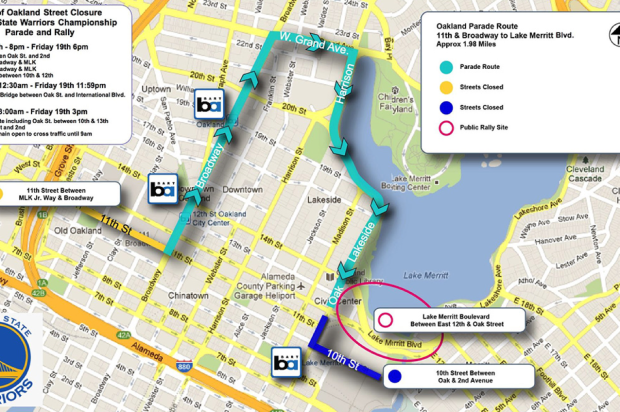 Oakland will host a parade and rally on Friday for the 2015 NBA champion Golden State Warriors.

The parade will start at 10 a.m. Friday for the Warriors, who won their first title in 40 years tonight by defeating the Cleveland Cavaliers 105-97 in Game 6 of the NBA Finals to close out the series 4-2.

The parade will begin at Broadway and 11th Street and will continue north on Broadway before turning right on Grand Avenue, then right on Harrison Street to Lakeside Drive, which becomes Oak Street.

The parade will proceed to the Henry J. Kaiser Convention Center for the rally, where fans can line up as soon as 5 a.m., team officials said.

BART will run extra trains through Oakland Friday and will modify routes to accommodate crowds for the parade and rally, according to the team.

More information about the parade and rally can be found online at http://www.nba.com/warriors/news/golden-state-warriors-championship-parade-and-rally.