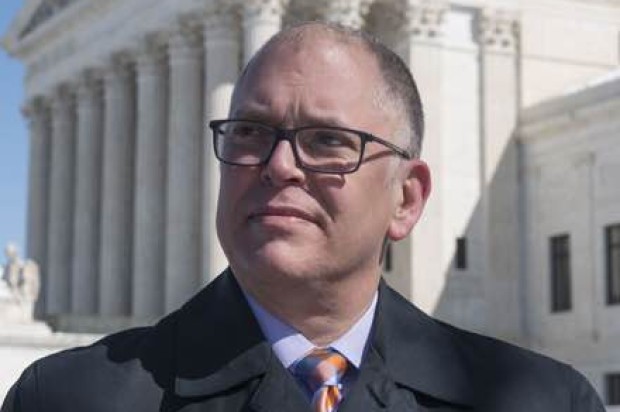 An Ohio man at the center of the same-sex marriage case now pending before the U.S. Supreme Court said in San Francisco today that “it’s an honor” to be the lead plaintiff, but one that he never expected.

Jim Obergefell, 48, a real estate broker in Cincinnati, is fighting to have Ohio recognize him as the surviving spouse on his late husband’s death certificate.

“When we decided to marry, we never thought of anything other than getting married and having the federal government recognize us as a couple,” Obergefell said at a news conference at City Hall.

Now, he said, “I promise to fight for an end to discrimination, nothing more and nothing less.”

Obergefell’s lawsuit is one of four consolidated cases in which the U.S. Supreme Court may finally decide whether the federal Constitution guarantees a right to same-sex marriage.

The other cases originated in Kentucky, Michigan and Tennessee. The plaintiffs are seeking either the right to marry in their state or the right to have an out-of-state same-sex marriage recognized.

Because Obergefell’s appeal has the lowest case number, the four combined cases are listed under the title of Obergefell v. Hodges. Richard Hodges is the director of health for the state of Ohio and has authority over death certificates.

The high court’s justices heard arguments on the consolidated cases on April 28 and are expected to issue their ruling by the close of their current term at the end of this month. The last day of the term is currently scheduled for June 29.

If the court does decide whether there is a federal right to same-sex marriage, the ruling is likely to be known in history as Obergefell or Obergefell v. Hodges, in the same way that the landmark 1954 ruling outlawing school segregation is known as Brown v. Board of Education.

Obergefell and his partner of 20 years, John Arthur, married on July 11, 2013, in Maryland, where same-sex marriage is legal. They decided to do so, Obergefell said, after the Supreme Court on June 26 of that year struck down a provision of a federal law that barred the U.S. government from giving federal benefits and tax advantages to legally married gay and lesbian couples.

At the time, Arthur was gravely ill with amyotrophic lateral sclerosis, or ALS. The two married aboard a special medical plane that stopped for a few minutes at the Baltimore/Washington International Airport. Three months later, Arthur died.

Before Arthur’s death, the couple sued to have Ohio recognize their marriage on Arthur’s death certificate. A federal trial judge ruled in Obergefell’s favor, but that decision was overturned last year by the 6th U.S. Circuit Court of Appeals.

A panel of the Cincinnati-based appeals court upheld the same-sex marriage bans in Ohio, Kentucky, Michigan, and Tennessee by a 2-1 vote after concluding there is no constitutional right to same-sex marriage.

Several other federal appeals courts, including the 9th U.S. Circuit Court of Appeals in San Francisco, have reached the opposite conclusion.

Obergefell said that if the court upholds his right to be recognized as a surviving spouse, it will “affirm John’s final record as a person.”

He said he is optimistic about the court’s ruling.

“I’m very hopeful we’ll be getting good news in a couple of weeks,” he said.

And if the court rules against him and his fellow plaintiffs?

“I can’t think about the possibility of a ruling against us. It’s too scary,” he said.