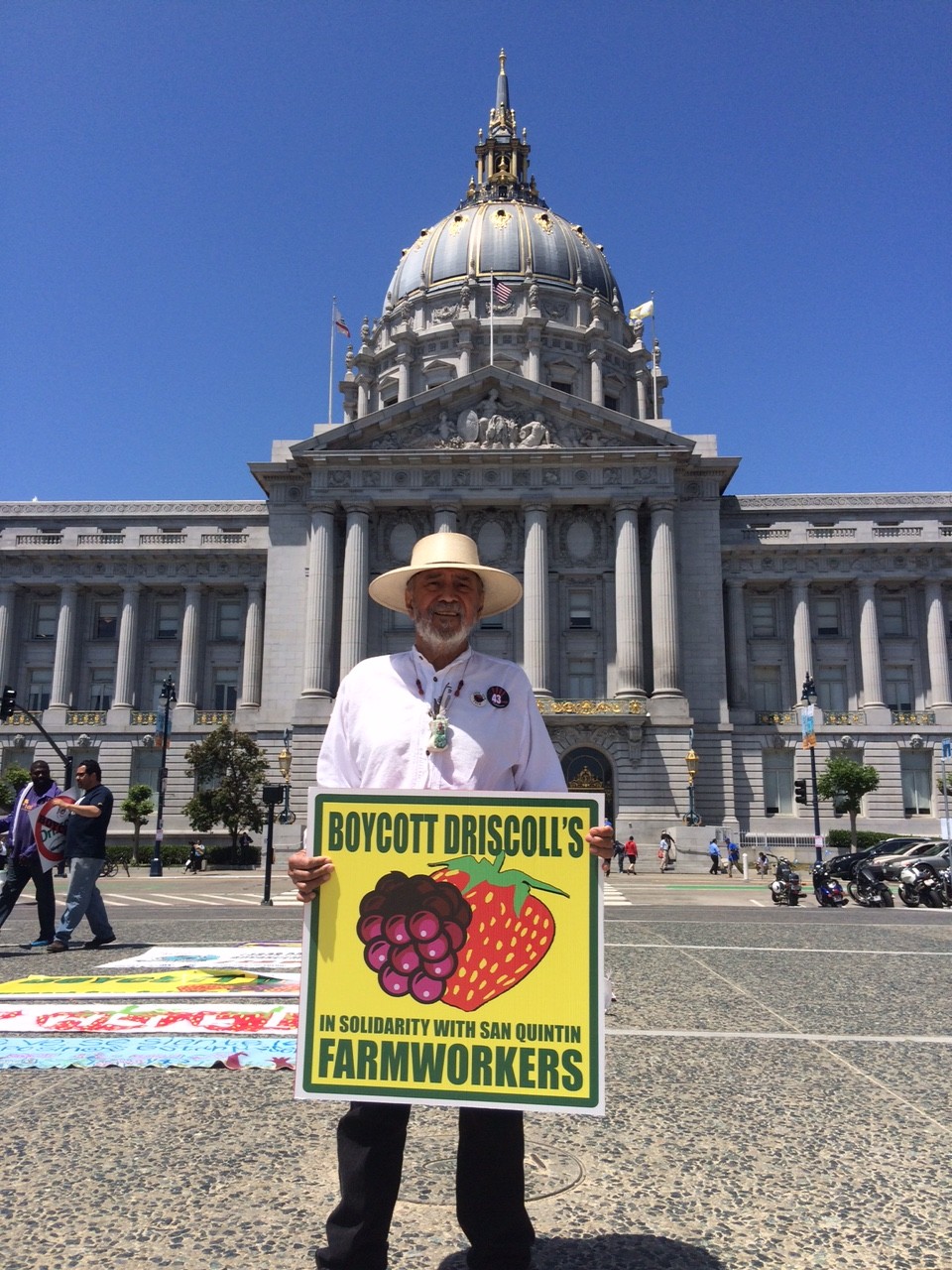 Al Rojas, a labor activist who worked on farms in Ventura and San Joaquin counties in the 1950s and 1960s, stood outside San Francisco City Hall today explaining why he supports the berry boycott and why he wants consumers at the supermarket to support it as well.

Rojas, who was a founding member of the United Farm Workers and who is the current president of the Labor Council for Latin American Advancement in Sacramento, said that by not buying strawberries, “You’re sending a signal to the industry that we’re not going to tolerate you feeding us chemicals and feeding them to our children.”

By not buying strawberries, Rojas said, it sends a message that consumers are not okay with Driscoll’s blocking worker’s right to unionize independent of the government.

Rojas expressed his support for the international boycott of Driscoll’s berries, as demanded by the nearly 70,000 farm workers in the San Quintin Valley.

According to Rojas, workers in San Quintin have not had legal recognition of their independent union, the Alliance of Farm Workers of San Quintin, or Alianza, and instead are covered by essentially government-run unions that favor the growers.

Workers in San Quintin, employed by BerryMex, a Driscoll supplier, began striking in mid-March and have been waging intermittent strikes, organizing road blockades and demanding an increase in their daily wage from about 100 pesos a day, or about $7, to 200 pesos, or about $13 a day, Rojas said.

Based in Watsonville, California, Driscoll’s is the world’s largest distributor of fresh berries with over 40,000 people globally involved in the enterprise of developing, growing and harvesting berries, according to the company’s website.

Pedro Reyes, an activist with Santa Maria Raza Si Migra No, said that workers in Baja are striking because they cannot live on wages as low as $8 a day.

Additionally, Reyes said that there are allegations of sexual abuse of young indigenous women on those fields as well as illnesses reportedly caused by the use of pesticides on the berry plants.

Reyes said it’s important that Americans recognize that much of the produce grown in Mexico is imported to the U.S. and that workers both in the U.S. and in Mexico are enduring unsafe conditions in the fields and in squalid housing, despite being part of a multi-billion dollar industry.

Reyes said workers are reporting skin infections on their hands and cataracts in their eyes. He said that much of the pesticides sprayed on the fields drifts away and is spread into the air of the surrounding community where workers live.

According to Reyes, breathing in those chemicals “everyday, all day, for months,” leads to serious health complications, even lung cancer.

The employer can afford to provide health insurance and a livable wage for their workers, but choose not to, Reyes said.

Reyes said the “injustice” goes even further, explaining that when workers get sick and want to go to the clinic they risk getting penalized or even fired.

Reyes said consumers should know that low wages and unsafe conditions are occurring not only in the fields of Mexico, but in California, Washington and other U.S. states.

Roughly 85 percent of the farm workers in every field in California are undocumented and are indigenous to Latin America, according to Reyes.

Most of the indigenous, undocumented workers in California, Reyes said, don’t speak Spanish and are actually speaking in their native languages.

According to Rojas, during his 15 years as a deputy labor commissioner for the California Department of Industrial Relations he saw how guest workers coming into the U.S. allow corporations to have cheaper labor and also make it more difficult for unions to organize.

“The undocumented community does not dare to file a complaint when they know they are being abused,” Rojas said, explaining that once you file a complaint you have to show your face and give your name.

United Farm Workers’ website does, however, have an online petition up to support the workers striking in Baja. The petition demands that the grocery retail industry hold “powerful agribusiness companies such as Driscoll accountable.”

Rojas said the international boycott of Driscoll’s berries sends a message to Driscoll’s, and other major corporations, that consumers around the world care about workers’ rights and demand fair labor practices.