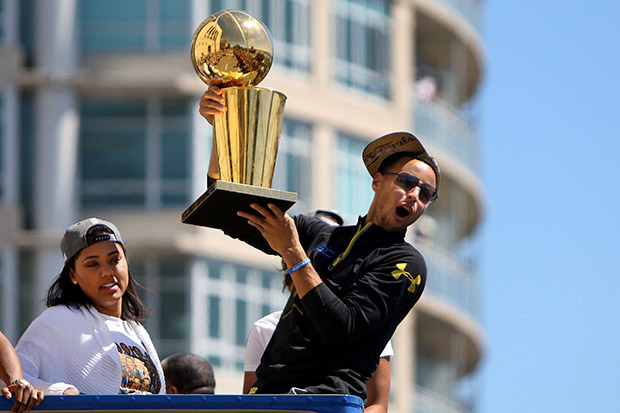 Stephen Curry (30) raises the Larry O’Brien trophy as the Golden State Warriors celebrate the NBA Championship with a parade and rally at Lake Merritt in Oakland, Calif., on Friday, June 19, 2015.

Pure elation was the mood today as thousands of people lined up along Oakland streets for the official parade and celebration of the Golden State Warriors’ first NBA championship in 40 years.

Fans found footholds wherever they could, including on top of chairs, benches, railings, 10 gallon buckets, on rooftops, restaurant signs, or pieces of public art.

Ticker tape streamed down from the sky, gold confetti burst out of parade floats and bubbles floated into the air.

“This is amazing,” said Oakland native and lifetime fan Arthur Martin. “I can’t put it into words. Oakland was already up and coming but this puts us on the map.”

For many fans, who had faced frustration during the four-decade drought, the championship win represented a turning point for the city.

Razon Tramble, a Castro Valley resident who said she has been a fan since Chris Mullin was on the team, described the win as uplifting.

“It’s like a renewal,” Tramble said. “It shines a good light on the city.”

The Warriors’ bested the Cleveland Cavaliers on Tuesday with a 105-97 win in Game 6 in Cleveland. Fans flooded the streets in Oakland and San Francisco — the Warriors’ once and likely future home — following the game with an exuberant display of revelry that was generally peaceful and not destructive.

Oakland natives and best friends Saya Leist and Amanda Ballesteros, their faces painted in blue and yellow emblazoned with the emblem of their favorite team, secured their spots along the parade route long before the official 10 a.m. start time.

“We’ve been fans since we were five or six years old,” Ballesteros said, adding they were hoping to grab a glimpse of their favorite players.

Like many, Bailey Gail of Oakland said she was here to see season MVP Stephen Curry and championship Finals MVP Andre Iguodala in person. Chants of “MVP” rang through the crowd as a bus carrying Curry and Iguodala rode by.

“I never thought (the Warriors) would do it because it had been so long,” she said.

The parade began at Broadway and 11th Street and continued north on Broadway before turning right on Grand Avenue. The route turned right on Harrison Street and Lakeside Drive, which becomes Oak Street, before ending with a rally at the Henry J. Kaiser Convention Center.

BART riders faced long lines at the Fremont station, according to BART officials. Some BART riders reported lines of hundreds trying to enter the station and clogged platforms exiting at downtown Oakland stations.

Shortly after 11 a.m., BART briefly closed its 12th Street station due to overcrowding.

BART spokeswoman Alicia Trost said the Fremont station has had nearly 10,000 entries this morning because of the Warriors celebration. As of around 10:30 a.m. some 200,000 had got onto BART, Trost said.

The top three entry points on BART this morning have been the Fremont, Dublin and El Cerrito del Norte stations, according to officials.

“There’s just so many people,” Trost said. “We’re going to have record ridership.”

BART ran extra trains through Oakland Friday to accommodate the record-setting crowds, according to BART officials.

Some public officials joined in the jubilation. U.S. Rep. Barbara Lee, D-California, said she was excited to join the entire East Bay in celebrating a “tremendous victory.”

“Under the guidance of Head Coach Steve Kerr and leadership of NBA MVP Stephen Curry, the team had a remarkable season and brought back the championship to Oakland after 40 years,” Lee said in a statement. “As a proud member of Dub Nation, I know that the Warriors’ loyal and faithful fans showed unwavering support for our team and were pivotal in clinching the trophy.”

Dr. Scott Taylor, an Oakland native, dismissed naysayers who doubted the Warriors’ would ever win another championship.

“It’s been a long time since they won, it’s long overdue,” he said.