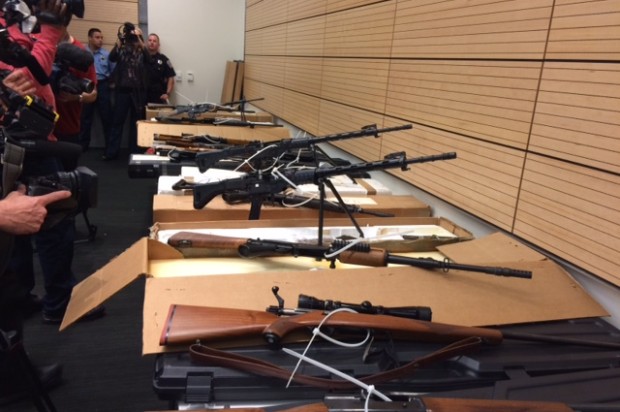 Two men associated with a series of robberies in San Francisco in recent months were arrested and a cache of assault rifles, sniper rifles, handguns and explosives have been seized from a suspects’ home in South San Francisco, San Francisco police Chief Greg Suhr said today.

Investigators are now working with the U.S. Department of Justice’s Bureau of Alcohol, Tobacco, Firearms and Explosives in an effort to understand how these military-grade weapons arrived in South San Francisco.

The cache of weapons included 22 assault rifles, 12 handguns, two shotguns, two bolt-action sniper rifles and 5,000 pieces of ammunition, including some of military-grade that can pierce through armor, according to San Francisco police spokeswoman Officer Grace Gatpandan.

San Francisco police Lt. Bill Braconi, who assisted in the investigation, said the department believes these weapons were in the Bay Area to be resold to persons in the Bayview District, but he said he has no idea where they originated.

He said that these guns, many of which are worth up to $10,000 apiece, are often sold to gang members to arm themselves for protection against members of opposing gangs, but are intended for military use.

Braconi said that none of the guns are registered, that all of the guns have serial numbers, and that so far all have been untraceable.

He said these types of weapons, some even with bayonets attached to the guns’ muzzles, others with tripods for sniping, are regularly seized in San Francisco’s Bayview District.

Braconi explained that a variety of firearms are being seized in the Bayview District on a daily basis and that rarely a month goes by when police don’t seize an assault rifle in that neighborhood.

“The AK-47 is a regular occurrence in the Bayview,” Braconi said, explaining that the neighborhood has a disproportionate amount of gun seizures in comparison to the rest of the city.

On Sunday, a 53-year-old man was killed by gunfire from an AK-47 assault rifle at the intersection of La Salle and Third streets. The suspects remain at large.

Suhr said that despite the presence of guns in the Bayview, homicides in the city are down by about half of what they were in the mid 2000s.

“Gun violence is also down by about 50 percent,” Suhr said.

He said this is the largest seizure of guns he remembers since 2009.

Braconi said that handguns, not assault rifles, were used during the robberies that led investigators to get the search warrant for the home in South San Francisco.

Police said the first robbery, in a string of robberies dubbed the Letterman robbery series because one of the suspects wore a brown and black letterman-style jacket, occurred on April 22nd. The robbery took place at a gas station on San Bruno Avenue in the Portola neighborhood.

The next robbery took place two days later at a store on Divisadero Street in the city’s Marina District, police said.

About a month later, two more robberies occurred involving the suspects. One was on May 17th at a gas station on Bayshore Boulevard in the Silver Terrace neighborhood. The next one took place two days later at a grocery store on Folsom Street in the Bernal Heights neighborhood.

Police said additional suspects have not yet been identified.

Matthews was taken into custody at about 1 a.m. on May 24th on Third Street in the Bayview District after a police officer recognized him from a crime bulletin alert. His vehicle also matched the suspect vehicle described in the robberies, police said.

The second suspect, however, was not arrested until last Wednesday when San Francisco police and the San Mateo County Sheriff’s Office’s SWAT Team served a search warrant at 111 Nursery Way in South San Francisco, police said.

Officers arrested Chin and the San Francisco Bomb Squad was called to the home. The bomb squad rendered the suspected explosive devices safe and police seized those devices along with additional bomb making materials and 38 firearms.

Police are continuing to investigate the robberies and the cache of weapons.