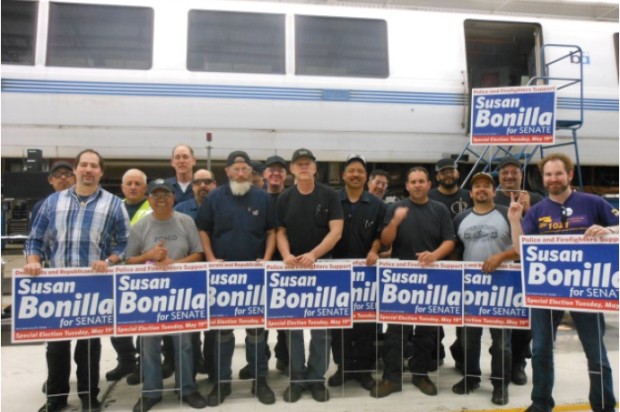 With the special election for the state Senate District 7 seat just over a week away, Democratic candidate Steve Glazer is accusing BART unions of illegally campaigning against him at BART workplaces.

The Orinda mayor will face off against state Assemblywoman Susan Bonilla, D-Concord, on May 19. Glazer has been an outspoken critic of BART employee unions since a protracted labor dispute led to two strikes in 2013.

Glazer has advocated for new state legislation to prevent California transit unions from striking. He lost a state Assembly primary election in 2014 and is now looking to win the state Senate seat vacated last November by Mark DeSaulnier, who was elected to the U.S. House of Representatives.

Glazer this morning distributed photos of BART employees holding signs in support of Bonilla on what Glazer said is railyards on BART property in Concord and Richmond and a BART classroom in Hayward. At least one of the photos was posted to the Service Employees International Union Local 1021 website.

Union leaders said the photos show individual political activity that was not union-organized and is therefore not illegal. Unions are prohibited from partisan political campaigning in public workplaces by California law.

“It just once again shows how anti-working people Steve Glazer really is,” Castelli said. “It just shows his true colors: That he is far to the right and has an anti-worker agenda.”

But Glazer said today the photos show SEIU organizers in each location and was incredulous that there was no union involvement in activities at three different locations.

“That’s spontaneous activity in a classroom with a union leader in the front of the room?” Glazer said. “They’re not being truthful. If this is how they treat the truth, no wonder the BART negotiations went so poorly.”

Glazer said he found one of the photos prominently displayed on the SEIU Local 1021 webpage, but it has since been removed.

But Castelli said while the union is involved in political activity and supports some particular candidates, it is very careful to follow the law at all times.

Glazer is also alleging that BART management has been complicit in the union activity, saying he thinks it was done with their supervisors aware of what was going on and willing to let it continue.

“I was critical of the union for walking but also equally critical of BART management’s incompetence and the BART board’s willingness to give management the same exorbitant pay raise as the workers,” Glazer said Sunday.

BART spokesman Jim Allison said today the agency is concerned about the allegations but “it’s too early to jump to conclusions. We need to look into the context and background of this.”

“BART employees like anyone else have a right to their opinions, but we will look into the regulations in terms of campaigns and electioneering on our property,” Allison said.