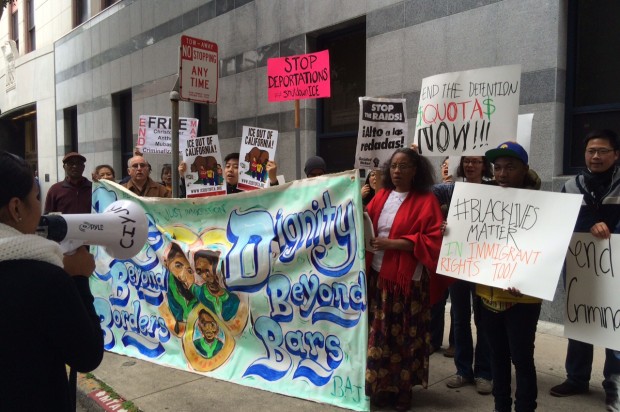 Protesters gathered in San Francisco today to call on U.S. Immigration and Customs Enforcement to end what they called the unlawful custody of asylum seekers.

The protest, held outside the ICE offices in downtown San Francisco, came on the eve of a caravan and protest planned to embark from Oakland and arrive at Bakersfield’s Mesa Verde Detention Facility.

Once at the detention facility, protesters will demand the release of three individuals of African descent who are allegedly being held past the legal time limit.

The detained individuals are Anthony Opoku, Mubashir Maelin and Christopher Henry, according to Abbas, a man who was recently released from the detention center.

Abbas, who is 32 years old and in the process of seeking asylum, said he felt it was not wise to use his full name.

Abbas grew up in northern Ghana as part of the Mamprusi tribe and said that he feared for his life and fled Ghana shortly after an opposing tribe killed his father.

After traveling through 12 countries, and having his passport stolen in Columbia at gunpoint, Abbas arrived in the U.S. at the Mexican border and sought political asylum.

He said he was held longer than the law prescribes and that others he met in the detention center are still being held despite their legal right to be released.

Rufaro Gwarada, an African immigrant and an activist with Priority African Network and Mobilize the Immigrant Vote, said today that “many African immigrants are invisibilized in the U.S.” and that their challenges with the immigration process are rarely known.

Abbas said when he was in detention, his bond was set at $7,000 but because he couldn’t pay it, his case went straight to court. He said he did not have access to an attorney and that he had to file the necessary forms by himself.

“Without a lawyer it was very hard to win the case,” he said.

The court wanted proof of his father’s homicide in Ghana and evidence that Abbas was hospitalized after being attacked, but Abbas said he wasn’t able to make international calls and was therefore unable to prove his need for asylum. He was thus scheduled for deportation. After more than six months passed awaiting deportation, he remained unlawfully in detention.

“It was very, very hard, it’s a jail,” Abbas said, explaining that the detained immigrants mix with the general population jail and are treated like criminals.

Suzanne Llewellyn, an activist with Community Initiatives for Visiting Immigrants in Confinement, said detainees are not guaranteed a phone call when they arrive in these facilities and are often unable to contact their families.

Abbas said when he finally was able to call his mother, after his release, she was sick with grief, not knowing whether her son was alive or dead.

“They really get lost in detention,” Llewellyn said, explaining that detainees don’t know their rights and don’t have access to legal representation.

Llewellyn said that as a result of the U.S. keeping 34,000 immigrants in detention each day, simply to meet a quota, allows for major private prison companies, such as Corrections Corporation of America and the GEO Group, Inc., that build and operate immigration prisons, to generate revenue and stock value off of these detainments, and that there is no incentive to release those detained.

Shares of the GEO Group, Inc., which operates the Mesa Verde Detention Facility in Bakersfield, was trading on the New York Stock Exchange for about $37.93 a share this afternoon.

Corrections Corporation of America’s shares were trading at about $35.16 a piece.

Llewellyn said she is doing what she can to help out those recently released detainees and is currently hosting two former detainees at her home in Walnut Creek.

She said that in the 2001 U.S. Supreme Court case Zadvydas v. Davis, the court ruled that the U.S. cannot indefinitely detain immigrants under order of deportation whom no other country will accept.

To justify the detainment of an immigrant past six months, the U.S. government is required to show removal in the foreseeable future or special circumstances.

Protesters who were gathered outside ICE offices on Sansome Street in San Francisco today said that detainees are continuing to be held in detention unlawfully for more than six months, being neither deported nor released.