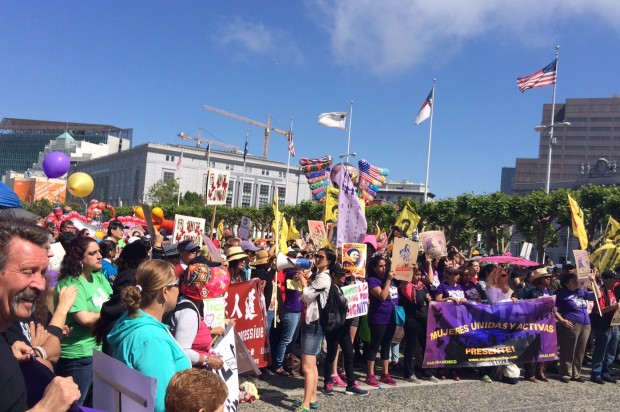 Hundreds of people rallied and marched in San Francisco today for International Workers Day calling for not only safe working conditions and fair pay, but also an end to police brutality, state violence, immigrant deportation and displacement of low-income residents in the Mission District.

Prior to a march from Civic Center Plaza to the Mission District, members of various advocacy groups met with police officers inside Bill Graham Civic Auditorium for a discussion about security during the march.

Olga Miranda, president of SEIU Local 87, said that activists would be working with police today to ensure the event stays peaceful and safe.

“This is a family event,” Miranda said.

She said despite everything else that is happening in the world today, such as protests in Baltimore over the death of Freddie Gray, activists want to work with police to ensure the safety of today’s event.

“Yes, there has been police brutality, but today we are working with police,” Miranda said, explaining that she is most concerned that families who come out today get home safely.

Among those who were out advocating in front of City Hall this afternoon on behalf of workers was Timothy Killikelly, president of American Federation of Teachers 2121, which represents City College of San Francisco teachers.

Killikelly said enrollment at CCSF is down and that teachers are making less now than they were in 2007.

He said that while CCSF teachers took pay cuts, some members of the CCSF administration have received a 20 percent pay raise.

“What is going to happen to the quality of education?” he asked. “How are you going to retain qualified faculty?”

“It’s really terrible,” he said, adding that faculty moral is low and teachers are frustrated.

He said that student enrollment is down and that in order to keep students, the college needs to keep its teachers and pay them a fair wage, otherwise teachers won’t want to be there and neither will students.

Killikelly pondered the future of CCSF if things continue the way they are heading.

“None of us became teachers because we thought it was the most lucrative field, we just want to be paid a living wage,” he said.

Other signs that read, “No to Racism, No to Police Brutality” and “Leave ‘Em Alone Baltimore PD” expressed activists’ disapproval of police brutality across the country.

Activist Kathleen Byrne marched with the large crowd to the Mission District holding a sign that read, “R.I.P. Freddie Gray.”

Byrne said she has been attending civil rights protests since the 1990s and said feels things are shifting and that people are becoming “more attune to police violence.”

She said so much of the violence generated by police toward the public is race-motivated and that officers don’t treat black people the way they treat white people.

Other activists, carrying signs that read, “End ICE and Police Collaboration” and “Borders=Repression” showed up for May Day to protest the U.S. government’s deportation of immigrants and demand protections.